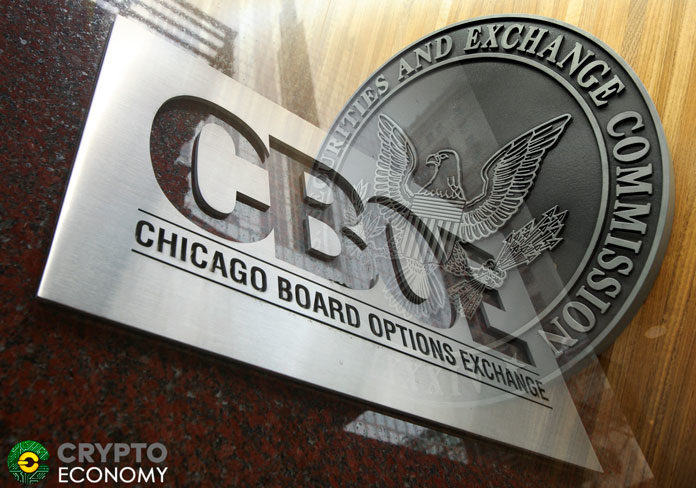 The Chicago Board Options Exchange (CBOE) has withdrawn yet again its jointly filed proposal with VanEck and Solid X to launch a Bitcoin Exchange Traded Fund (ETF) with the SEC. according to an SEC filing published on Tuesday, September 17th, Cboe filed the withdrawal on Friday last week. No reasons were cited in the SEC announcement. The proposal for the SEC to amend its rule on ETFs in order to allow the launch of the very first Bitcoin ETF in the US was due for a determination on October 18th after undergoing multiple delays since its filing back in January this year.

This is the second time that the Cboe has withdrawn its proposal filing after initially withdrawing earlier this year following the prolonged partial US government shutdown that started on December 2018 and lasted for about three weeks through mid-January. At the time, the SEC was due to make a determination on VanEck/SolidX’s application but the firms withdrew the application only to refile it a few days later. The SEC has then had to delay its decision a number of times giving the applicants time to address the commission’s concerns which include among others price manipulation and custody of digital assets.

Following this withdrawal, the commission still has two more applications awaiting its decision. The first one being Bitwise’s joint application with NYSE Arca exchange with a final determination date scheduled for October 13th. The other one filed more recently by Wilshire Phoenix is due to a decision announcement before the end of this month. However, the commission has the option to push its decision further just as it did with the other two proposals.

SEC Chairman Jay Clayton has recently said that in regards to a Bitcoin ETF approval, “progress is being made” however there is still work left to be done. This “work” could be the reason for Cboe’s withdrawal, however, that is yet to be confirmed. In a tweet regarding the news, VanEck’s director of digital asset strategies Gabor Gurbacs said that:

We are committed to supporting Bitcoin and Bitcoin-focused financial innovation. Bringing to market a physical, liquid and insured ETF remains a top priority. We continue to work closely with regulators & market participants to get one step closer every day.

Bitwise is reportedly not shaken by the news of its rival proposal to withdraw. Speaking to reporters, the company’s COO Teddy Fusaro said that:

At Bitwise we continue to work on our filing and through our research to answer all of the substantial questions that the SEC has raised over the years, and we intend to continue to highlight how the industry has made progress in being able to satisfy those hard questions.