Binance CEO CZ Gets Passed On the “Lightning Torch” 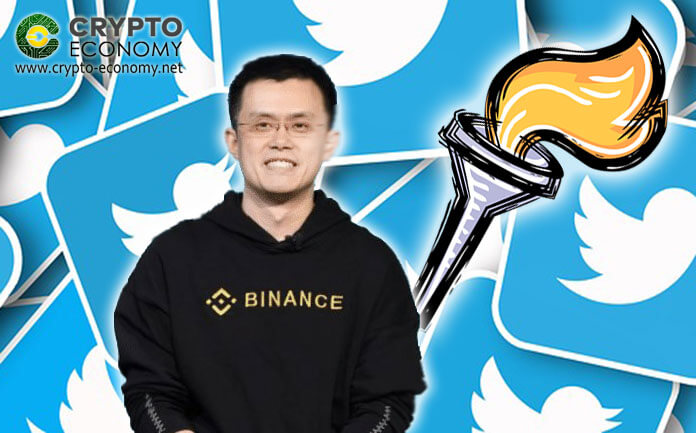 The Bitcoin Lightning torch, an experiment started by a pseudonymous Twitter user @hodlonaut last month is still burning bright. The current holder of the virtual torch is none other than CZ himself, the CEO of the leading cryptocurrency exchange Binance.

To which they received a prompt reply from CZ saying

CZ created a Lightning invoice for 3.12 million satoshis to TravelbyBit. Creating an invoice opens the payment channel between two transacting addresses. Immediately TravelbyBit passed on the torch and declared that,

CZ has since been having fun as the torch bearer. He tweeted right after receiving it and said,

“Apparently, I hold the torch now. #LNTrustChain I must say, it feels very cool in my virtual hand. :)”

The rule of the game is to pass it on to the next person that you trust. However, CZ has taken another approach in which he decided to poll his followers to suggest to whom to pass it on. Some of the suggestions from his followers have predominantly included Elon Musk, the CEO of Tesla and Space X. other have suggested Elizabeth Stark, the CEO of Lightning Labs and Jack Dorsey the CEO of Twitter, however both of these personalities have received it before.

Elizabeth Stark declined the offer but then suggested that Charlie Lee, the creator of Litecoin be passed on the torch. Charlie did not seem to shy away from a challenge and he wrote,

“I will take it off your hands since no one wants it. ?”

entertaining the idea of Elon Musk receiving the torch from hi, CZ replied to Charlie saying

“I am sure you will get it soon enough, let me harass brother @elonmusk a bit more. Lol.”

So far 176 participants have taken part in the experiment hailing from across the globe. Hodlnaut, the originator of the experiment tweeted a few hours ago with a list of names of people s/he would like to see carry the torch. The list includes notable individuals such as @elonmusk, @NickSzabo4, @peterktodd, @adam3us, @piratebeachbum, @jordanbpeterson, @joerogan, and @kanyewest. Some of these individuals are not necessarily in the blockchain industry.