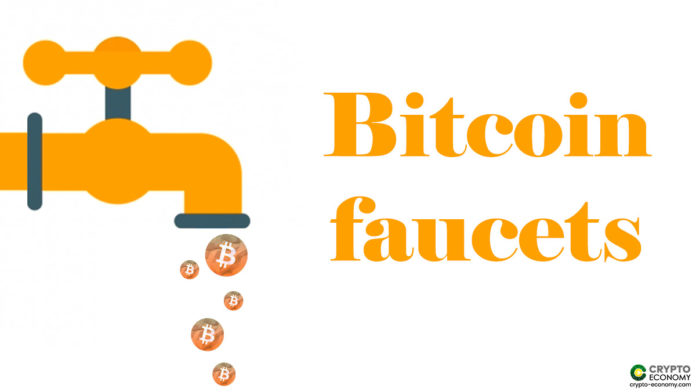 Investing in Bitcoin and other cryptocurrencies is not within everyone’s possibilities, but thanks to Bitcoin faucets anyone who has access to the Internet has the possibility to get free Bitcoin. In this review, we will explain what are Bitcoin faucets? How do they work? And which are the best?

What is a Bitcoin Faucet?

Bitcoin faucets are pages or applications that give away fractions of BTC for performing different actions, such as seeing advertisements, staying on a page for a certain time, solving a captcha or just clicking.

As can be read on Wikipedia, the first faucet known was created in 2010 by Gavin Andresen and its rewards were 5 bitcoins per person, which today would be equivalent to thousands of dollars.

At present, these faucets distribute fractions of bitcoin, called satoshis, but although the amounts they distribute seem small, you never know the value that Bitcoin can reach over the years, and if those won Satoshis could have a value of thousands of dollars, just like what happened with the Gavin Andresen Faucet.

Why do they give BTC?

Surely the first time you heard about bitcoin faucets, you thought it was a scam and that it was impossible for them to give away free bitcoins.

But thinking carefully, giving bitcoin to its users can even be profitable, as it is a way to attract thousands of visits to your website and therefore benefit from it.

The traffic generated by a website is one of the bases to be able to earn money with it. The more traffic, the greater the benefit. Whether through advertising banners, betting services on the platform, sponsors articles or sale of courses or other products.

What is certain is that if a page gives money through a Bitcoin Faucet, its owners are making a profit greater than the expenses.

Tips when choosing a BTC Faucet

Although the Bitcoin Taps give away cryptocurrencies, you have to be careful and take certain precautions, since nobody likes to lose money (even if given away) or see how time and effort invested vanishes.

Before entering a Faucet, carry out a previous investigation. Look at its website, its social networks, see how long it has been in operation, if there are complaints from users regarding payments, things that seem basic but that are often overlooked.

One of the best tips when using a Faucet is once you reach the minimum withdrawal amount, do it and send it to a wallet of which you have control.

Faucets are not places to accumulate and save bitcoin. Waiting to accumulate a greater amount before making a withdrawal is not a good idea, since you never know if the next time you are going to enter it will remain open.

Using an exclusive wallet for Faucets can be a good way to keep track of the benefit obtained.

Other very important data when choosing a Faucet are:

Next we are going to talk about the 5 best Bitcoin faucets that are currently available.

Keep in mind that any of the values ​​shown, both in rewards, withdrawal amounts, waiting times, etc … may vary over time.

Freebitcoin is one of the best-known bitcoin faucets, it works for years and continues to pay, it also offers its players the possibility of other games to multiply their bitcoins, make bets in different events, and raffles where they have raffled a Lamborghini.

Moonbit is a bitcoin tap that has been running since 2014, to use it you will need to disable ad blockers.

Payments can be requested every 5 minutes. The coins won are shown in the CoinPot affiliated wallet. In addition, the site administration offers a profitable referral program, Loyalty Bonus and other Bonus classes to gradually increase the reward earned.

Cointiply, in addition to a cryptocurrency faucet, offers its users different possibilities to win free virtual currencies, you just have to follow the instructions and earn satoshis every day. In addition, Cointiply gives bonus for loyalty to obtain greater prizes.

The amount of satoshis that Bitfun gives at the beginning is low, but this service has fidelity bonus, which is added every consecutive day that you enter the platform. It also has a referral program that offers 50% commission. Bitfun Accumulate the balance in Coinpot.

As in Bitfun, the starting amount is quite small, you have to accumulate Bonus points every day so that it begins to be interesting to enter this platform, but do not forget that constancy is essential in the bitcoin faucets. The Satoshis obtained accumulate in Coinpot.

On many occasions, people who try Bitcoin Faucets think that they will earn large amounts in a short time and when they see that they are rewarded they are only a few cents they lose interest quickly.

Bitcoin Faucets are a totally valid way to get Free BTC, dedicating a few minutes a day and being consistent you can get good benefits in a long time.

Following the advice we have discussed in this tutorial, you can see that in a few months and without having invested money, you will have accumulated your small investment in bitcoin.