Acala Will be Home of Data Indexing Solution SubQuery Network 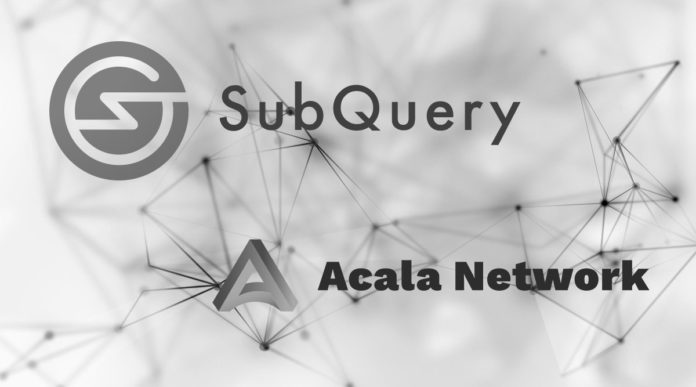 Data indexing solution SubQuery has announced that its upcoming SubQuery Network launch will be on Acala parachain.

SubQuery announced the news in a blog post on Thursday, November 25. By launching on Acala, Subquery aims to become the first external application on the DeFi hub of Polkadot. SubQuery will be leveraging the upcoming Acala EVM+.

🚀 We are proud to announce that the launch of the SubQuery Network will be on the @AcalaNetwork #Parachain!

SubQuery is a data-as-a-service provider that aggregates and organizes data from Polkadot and Substrate projects, serving up well-structured data for developers to use for a wide array of projects. It operates between the layer-1 blockchains and decentralized apps (dApps)

The project aims to provide developers with powerful tools to process and query their data faster so that focus on their core use case and front-end, without needing to waste time on building a custom backend for data processing.

SubQuery is a team and the SubQuery Network is the product they are delivering. Developers can create and run their own SubQuery project by using open-source Subquery SDK, or they deploy their projects to its high-performance nodes. The project itself will be powered by an SQT token.

According to the team, its upcoming SubQuery Network will decentralize and tokenize the ecosystem to allow everyone to participate in the web3 data revolution. To fund the development of the SubQuery Network, the team announced a $9 million funding round.

To bring the project to life, the team has chosen Acala, the defi hub of Polkadot. As reported, Acala is going to be the first real-world parachain on the Polkadot as it has won the first Polkadot parachain auction.

According to the announcement, the reason that went into this “decision to launch with Acala were community access, domain/technical excellence, and our existing robust relationship.” SubQuery is eyeing for the upcoming Acala EVM+ launch. When Acala will connect to its parachain slot, any DApp team can deploy their EVM-based smart contracts onto the Acala EVM+.

“By launching on an EVM compatible chain, SubQuery’s token generation event (TGE) will seamlessly allow participation by investors from the Ethereum ecosystem through the use of Metamask. With Acala’s EVM+ users can even link their Ethereum addresses with their Polkadot addresses, overcoming the need to manage multiple accounts.”

“Acala will play the role of DeFi hub for Polkadot and a landing pad that aggregates assets and liquidity from a variety of blockchains. We are excited to be able to continue our close relationship with SubQuery and launch the SQT token and SubQuery smart contracts on our platform.”

The Polkadot ecosystem is entering a new era and the combination of Acala and SubQuery can help Polkadot to deliver best-in-class Dapps to the  crypto community.

0
Kusama parachain auctions are running smoothly, and the team has announced the conclusion of the 15th auction with DeFi conglomerate Equilibrium’s sister network Genshiro as the winner.
Read more
CryptoCurrency News

0
Polkadot is still one of the most appealing investments in the crypto market and is the most commonly held crypto by funds. According to...
Read more
CryptoCurrency News

0
The Polkadot ecosystem is all set to begin its new era as the Polkadot parachain auctions are going to start from tomorrow, Thursday, November 11.
Read more
CryptoCurrency News

0
Composable Finance’s canary network Picasso will now be onboarded as Kusama’s 13th parachain at the start of the next lease period as it has won the 12th parachain auction.
Read more
CryptoCurrency News

Kusama: Third-Batch for 24 Parachains Has Commenced

0
Kusama parachain auctions for the third batch of 24 parachains has commenced on Monday, October 25, after two days of delay.
Read more
- Advertisment -
We use cookies to ensure that we give you the best experience on our website. If you continue to use this site we will assume that you are happy with it.OkPrivacy policy