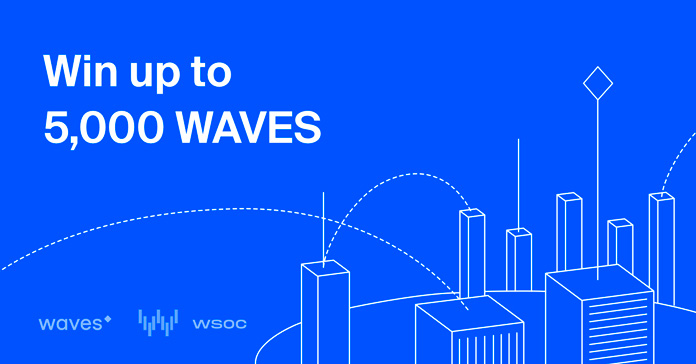 ZUG, Switzerland – May 23, 2019 – Waves, a leading blockchain company and Web 3.0 pioneer, became the general sponsor of the World Series trading tournament (WSOC), shortly to be held on Waves DEX. Participation is free, and the winner will receive up to 5,000 WAVES in prize money!

“The World Series of crypto trading (WSOC) – is a platform that specialises in holding trading tournaments, inviting all exchanges and the whole crypto community to participate.” comments Sasha Ivanov, Founder and CEO of Waves. “We are convinced that the choice of Waves DEX exchange for the tournament by WSOC will provide complete transparency and reliability of the outcome. So let the battle begin!”

Participation is absolutely free. Every entrant will receive 100,000 dUSD (demo dollars) as a starting balance. The whole contest will be held on Waves DEX using five pairs of demo assets, and the whole event will be totally trustless, decentralised and transparent. Anyone who finishes with more than 100,000 dUSD will be entered into the prize pool.

Deposits for other assets, and withdrawal of these demo tokens, will not be available. Statistics for all traders’ results can be found in the tab on the main page of the WSOC. Personal statistics will be available in each user’s account information, or viewable using the filters in the tab on the main page. Trading fees will be paid from the user’s balance of WAVES.

By the end of the tournament all demo tokens for all traders will be frozen and their value in dUSD calculated at spot price. Traders with a final balance of over 100,000 dUSD will receive part of the prize fund. The pool of winners will be displayed in the Achievements tab on the main page of WSOC website.

The prize fund will be distributed as follows:

To get more information and submit an application, please, proceed to the WSOC official website.