What is Ethereum Classic [ETC]?

Ethereum Classic (ETC) is an open source decentralized online payment platform, based on block technology and the original Ethereum code. Consequently, like Ethereum, it provides a value token, called “Ether Classic,” which is used to pay users for products and services. This currency was created as a way to guarantee a more open digital financial system.

Currently this currency continues to offer the same characteristics as Ethereum, such as the creation, deployment of intelligent contracts and the creation of decentralized applications, in addition to having the specifications regarding the average time of the blocks, the size and the reward received by each one.

It should be noted that Ethereum Classic is not an anti-Ethereum as many catalog it. It is only part of a larger Ethereum ecosystem. That is, it is another community that shares a different set of values.

What was the reason for the separation? 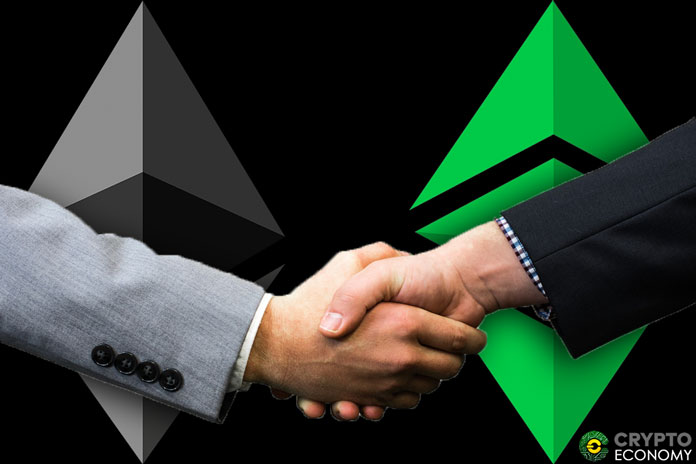 In June 2016 the Decentralized Autonomous Organization (DAO, based on Ethereum), was hacked using the same security flaws indicated in a document presented in May of that year, where it emphasized that there were flaws in the process. So approximately 50 million dollars of their funds were stolen.

The attack and the debate that followed this event caused a break in the Ethereum community. On the one hand the developers of Ethereum could revert the problem, returning all the Ether to their respective users. However, the central philosophy of cryptocurrency is that transactions can not be edited or eliminated.

As a result of this, Ethereum underwent a crossroads, copying and modifying the main code to revert the DAO trick. Meanwhile, the main code remained as it is, and the community started calling it “Ethereum Classic”. Since then both currencies have been operating separately but sharing some ideologies.

What is the Soft-Fork and the Hard-Ford of Ethereum?

When a chain needs to be updated, there are two ways to do it that is through this mechanism:

The main purpose of this new version was to return all the money that had been stolen. Therefore, an intelligent plan was designed whose function was to return 1 ETH for every 100 DAO tokens that a person had.

The most important premise of the plan is to maintain cybersecurity and be an efficient currency. Maintaining an adequate monetary policy and indirectly promoting the development of the network, in turn providing a secure platform required for the development of all intelligent contracts.

Added to this the objective is to build a blockchain platform that allows software developers to create applications whose databases and transactions are stored, not on a single server owned by a specific company, but on all connected nodes and users to the Ethereum Classic blockchain.

Do I need two different wallets for Ethereum and Ethereum Classic?

For now yes. You must have two separate wallets installed.

Like other altcoins, it is very easy to use once you have installed a compatible portfolio with Ethereum Classic. You just need to follow some steps:

While the initial plan was to follow in the footsteps of Ethereum, ETC will likely continue to diverge as Ethereum continues to present features that many in the Ethereum Classic community will not agree to.

There are indications that Ethereum can move towards a participatory test system, where block generation is carried out by coin holders instead of miners.

0
The State Bank of Pakistan (SBP), the central bank of the country, has recommended an outright ban on cryptocurrencies in a report submitted to the court.
Read more
Price Analysis