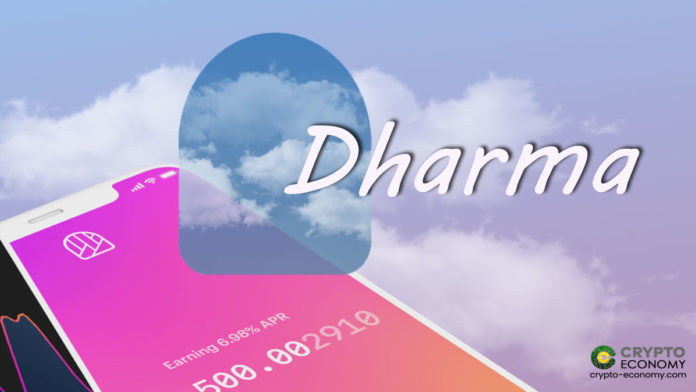 The ‘King of DeFi’ Uniswap may lose its ‘independence’ as the leading lending protocol Dharma issued a governance proposal threatening the decentralized exchange.

The famous DEX currently faces its first proposal, issued by Dharma. However, community members are concerned that if accepted, the lending protocol may have a major say in governance.

Created this week, the governance proposals titled ‘Reduce UNI Governance Proposal & Quorum Thresholds’ seeks to reduce governance limits. The vote will end on October 19 and already has a majority of the community voting positively for the proposal. At the time of writing, there are 30 million ‘For’ votes and only 625k,861 ‘Against’ votes. 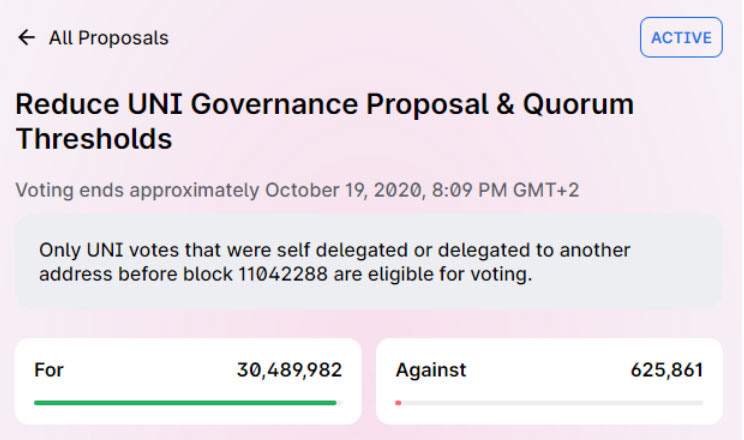 In the description, the proposal notes that the requirements for managing governance are too high compared to the total delegated UNI tokens. Moreover, it is claimed that the community held multiple discussions regarding lowering these requirements in the past.

Dharma argues that such measures would turn Uniswap more accessible governance-wise. To do so, they propose a minimum threshold of 3 million UNI tokens for submitting proposals and 30 million for a quorum.

At the same time, the governance proposal requires a ‘Governor Alpha’ contract to be created. Dharma has already deployed such a contract, which transparently includes all the previously mentioned changes. “We believe this proposal will help foster a vibrant Uniswap governance process, and we are excited to participate in these governance decisions,” concluded Dharma.

However, a part of the community fears that if passed, the proposal would turn Dharma and other large holders into major governance actors. Prominent Uniswap community member David Felton recently wrote a blog post explaining how the proposal would hurt decentralization.

According to the writer, the state of the exchange’s governance decentralization is already at risk. Dharma owns 15 million UNI tokens in just a single address, which allows them to heavily influence the governance model. Even if the proposal does not pass, he argues that these problems need to be resolved.

Apart from Dharma, there is another major blockchain platform that has a significant stake in Uniswap. Blockchain simulation platform Gauntlet similarly holds 15 million in UNI tokens. Combined with the lending protocol, they have 30 million in total. In the case that these platforms group up, they could significantly steer the direction of Uniswap.

The default governance thresholds on Uniswap require 10 million UNI tokens to be delegated with a quorum of 40 million tokens. Based on the first proposal and the number of assets both projects own, we can conclude that they would reach the exact minimum required to pass a vote. Felton believes that they would be so strongly entrenched in governance that ‘they might as well just outright own the DEX.’

However, it appears that Uniswap already sealed its fate. The governance proposal is close to reaching the minimum amount required to pass. Already at 30 million, Dharma needs to collect only 10 million more ‘For’ votes in the next five days. If the community is correct, a negative outcome would mark a black day for the leading DEX in DeFi.