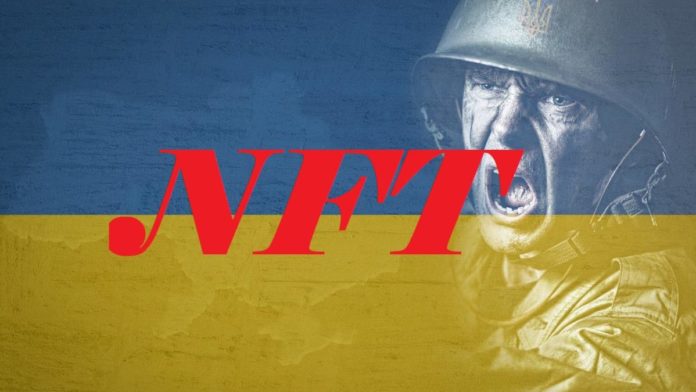 In an effort to raise funds against its war with Russia, Ukraine, has sold a CryptoPunk NFT for 90 Ethereum (ETH) approximately $100,000. Ukraine had received the CryptoPunk 5364 NFT as a donation in early March during its fundraising campaign amidst the war.

Non-fungible tokens (NFT) have gained a stance of key importance in the ever evolving crypto technology. NFTs have become not only a platform for artists to showcase their digital artwork but a substantial investment tool. The digital collectible sector has embellished itself as a, ‘hot bed of capital inflow’. Since its inception, the NFT industry has witnessed tens of millions in sales every month. The burgeoning NFT space has also become a highly contested platform to raise funding for various purposes.

Breaking news on crypto donations: #CryptoPunk #5364 has been sold for 90 ETH. It's over $100K. Few months ago this NFT was donated for @_AidForUkraine fund. Crypto community continues to support Ukraine.

On June 20, Alex Bornyakov, deputy minister of digital transformation of Ukraine, announced the sale of a CryptoPunk 5364 NFT for 90 ETH raising more than $1,00,000. The NFT was donated to Ukraine as part of its its crypto fundraising campaign, ‘Aid For Ukraine’, in March 2022. The digital artwork was over $2,60,000, when it was first transferred to Ukarine’s ethereum wallet before ETH started to decline drastically.

Preceeding this transaction, a NFT of the Ukrainian flag was sold for 2,258 ETH (roughly $6.75 million) by UkraineDAO, a crowdfunding effort led by Russian art collective Pussy Riot and non-fungible token studio Trippy Labs to support Ukraine’s humanitarian crisis. According to the Ukranian government, the cryptocurrency fund assists the country in purchasing non-lethal goods such as protective vests and medical kits.

Thank you to all who supported our project 🙏

Next steps: POAP for all those who donated to partybid, work with Come Back Alive on safely transferring funds

As per Bornyakov, the crypto fundraising is also used to buy military equipment and fund media activities. He said that the crypto assets proved extremely helpful in facilitation of funding to the Armed Forces of Ukraine. Bornyakov remarked,

“We don’t use this fund to buy weapons at this point. We’re buying night vision goggles, optics, helmets, bulletproof vests.”

Crypto assets proved extremely helpful in facilitation of funding flows to the Amed Forces of Ukraine. Huge thanks to everyone who donated to the Crypto Fund of Ukraine.

Each and every helmet and vest bought via crypto donations is currently saving Ukrainian soilders' lives. pic.twitter.com/CghDmXEcJG

How Ukraine Benefited From Crypto?

Ukraine has been dabbling with cryptocurrency since Russian soldiers entered the country. In March, the Ukranian government launched a collection of NFTs ‘Museum of War’ to document the series of events taking place in the war and to raise funding for its military. Bornyakov, explained that the virtual collection would be like a physical museum where people could see the war in digital format.

Since the beginning of the Russian invasion, Ukraine, has raised more than $135 million in cryptocurrencies through crypto donations and the selling NFTs. On February 26, Ukranian officials had tweeted pleas for cryptoasset donations amd lend a helping hand to support the country in its dark times.