The auction platform of ICO’s RateI.CO also offers its own ICO 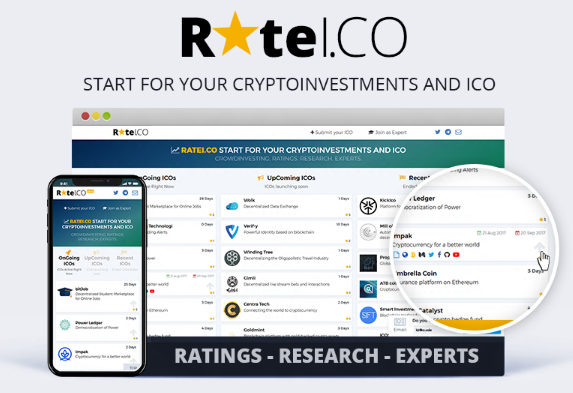 The alternatives that have recently been observed in the environment of cryptography are a clear perspective of the rise of blockchain technology and its indisputable acceptance in the most diverse areas. And in this vast emergence of projects, funding has played a crucial role by appealing to the interested public. With the advent of the ICOs as an alternative financing of these projects on the basis of crowding, capitals now move from the interested users, which has created an unprecedented phenomenon in these subjects. Such is being the force of this trend that in the market is required of more and more platforms that guide these efforts, and on this premise on this occasion we will talk about the RateI.CO platform.

RateiI.CO is the first platform 100% focused on supplying services of ICO’s auctions based on blockchain technology, which has detailed information on ICO projects past, present and future. By incorporating the technology blockchain, they also offer a completely transparent platform that covers all the transactions that take place in this platform.

With the vision of being a safe and transparent platform that will ostensibly increase the reach and potential of ICO projects to more complete levels, RateI.CO also has its own ICO projected.

The way that RateI.CO addresses its niche market is explained by the fact that the Internet and social networks are saturated with ads that promote the ICOs. So finding a reliable platform on which to promote an ICO, and therefore having access to thousands of potential investors is not an easy task. That’s why the companies that launch ICOs are currently spending a large part of their financial and human resources in promoting their project.

The Blockchain RateICO auction platform will revolutionize the way ICOs are promoted through the Internet. Through the use of a multitude of technologies, the effectiveness and returns of marketing investments in ICO projects will skyrocket.

Users qualify the ICO in RateI.CO using the Star Tokens (STR), which are the platform’s native token. The more stars (STR) and ICO accumulate, the higher the list moves. ICOs are divided into three lists: past, current and future.

All ICO projects included in the list will be sorted according to the number of stars they receive.

RateI.CO is in the pre-ICO stage and from October 1st to November 18th will be the ICO proper, in which 40,000,000 STR, with a reference value of 1 ETH = 150 STR, will be placed. For more details about how to participate in this ICO can enter in this thread of BitcoinTalk.

They can follow all the interesting news of this platform in their social networks and especially in Twitter.