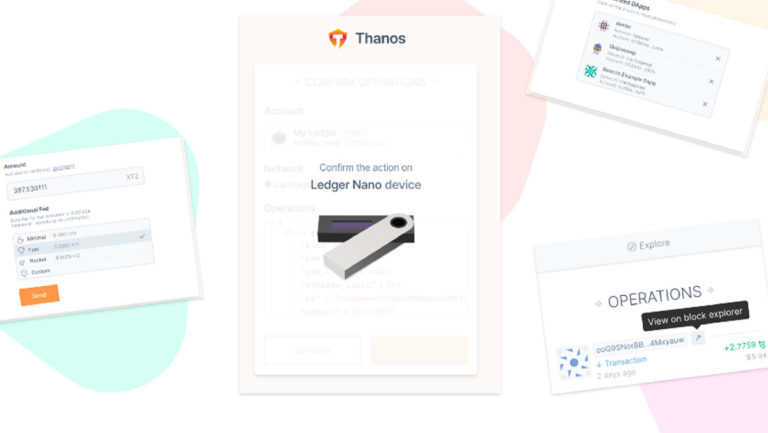 Thanos wallet released a new version that adds support for Ledger Nano and includes some more exciting upgrades. The famous Tezos wallet added support for one of the leading hardware wallets, which were one of the critical asked features.

Thanos also announced the passing of security audit done by LeastAuthority. The audition didn’t find any essential issues of the Thanos wallet.

The new version of Thanos can easily connect to Ledger Nano (both S and X versions). Users who have installed Thanos plugin on Chrome or Brave browser now will see a “Connect Ledger” icon in their profile section. The process is straightforward and needs adding a name and accepting the addition in the connected Ledger Nano wallet. Thanos team will add support to Firefox, too.

Working with hardware wallets like Ledger Nano creates an ease of mind to cryptocurrency users. The ability to connect them to famous software wallets makes it easier to interact with others while keeping your holdings safe.

“After setting up the Ledger this way you will be able to use it as a regular account for interacting with DApps and sending XTZ or tokens to other Tezos accounts,” according to the blog post by Thanos.

Adding support for Ledger Nano is just one of the new features in the latest release of Thanos. Like any other software product in the tech world, the latest update includes bug fixes and new features. One of the bug fixes in the new Thanos wallet was done in the operation history view. Some of the other new features are:

Thanos wallet tries to offer the best solutions and features to Tezos community. Although it currently supports Chrome, Brave, and Firefox browsers only, other famous browsers like Opera, Microsoft Edge, Yandex Browser, and Vivaldi are on the roadmap.