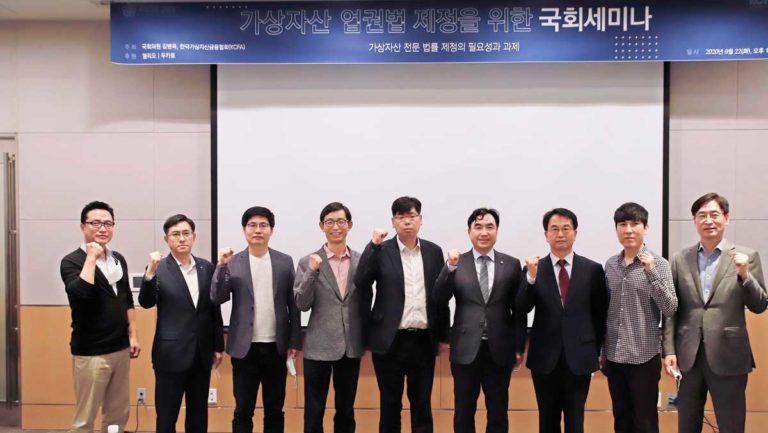 The National Assembly of South Korean has started to work on establishing the virtual asset business law, saying that it is necessary for a huge transformation to the digital economy in the post-COVID-19 era and the development of financial industries.

In a press release published on Wednesday, October 7th, the details of The National Assembly Seminal for Virtual Asset Business Law that was held back in September, were revealed. The seminar was held in the Federation of Korean Industries hall in Seoul. In the seminar, representatives from major commercial banks and members of the National Assembly insisted on the establishment of the Virtual Asset Business Law to address the growing regulatory requirement of virtual assets.

The seminar was hosted by Delio, a Seoul-based crypto-lending platform on Bithumb, and Rep. Kim Byeong-work, the secretary of the National Policy Committee and a lawmaker from the Democratic Party (DP). Delio’s DeFi project Ducato sponsored this seminar.

The National Assembly has now begun to work on establishing the Virtual Asset Business Law. This follows the recent amendment to the Act on Reporting and Using Specified Financial Transaction Information for regulating money laundering of virtual assets.

According to the participants of the seminar, this law is a necessity as the world is rapidly transforming into a digital economy. Kim Tae-nyeon, floor leader of the ruling DP, said that the establishment of the Virtual Asset Business Law was a national development plan that will transform Korea into a leading nation.

“Building an AI government utilizing blockchain is one of the main pillars of the Korean New Deal.”

Rep. Youn Kwan-suk, the chairman of the National Policy Committee, said that the National Assembly was brainstorming on how to revise the overall laws for digital finance innovation and this should be done swiftly.

Koo Tae-eon, the attorney in charge of the legal revision, commented:

All the participants have agreed to legislation on the virtual asset business law the South Korean is now expected to speed up the development of regulation around virtual assets.