Signal to Test Privacy-Focused Payments in Partnership with MobileCoin 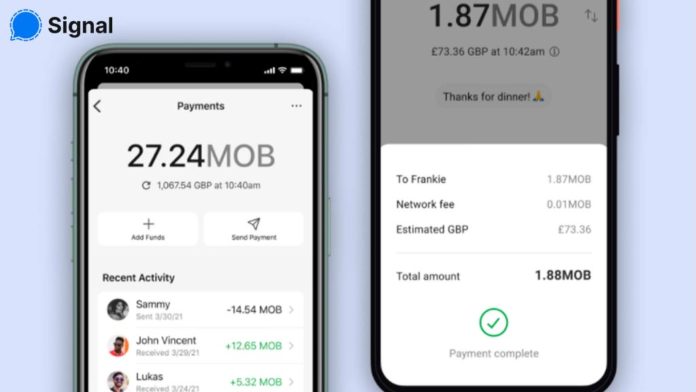 Signal Payments is the new feature in the Signal application that is currently available in Beta for users in the United Kingdom. It provides privacy-focused payments for users and is the result of a partnership between Signal and MobileCoin (MOB).

Signal is one of the controversial messaging applications in the market that has experienced massive growth in the past year. After news about leaks and misuse of users’ data in popular messaging apps were published, many users decided to use alternative solutions like Signal. The application focuses a lot on the privacy features and claims to be one of the leaders in this ecosystem.

Mobile payment is a very demanded feature in messaging apps. Users love the feature of sending and receive money in a way like messages to their friends and colleagues. Many messaging applications have tried to offer the feature, and WeChat is the leader in this path. Signal has been working on the feature for quite a long time, and now the first Beta version is ready for the public. The latest Signal Beta includes a Signal Payments feature that lets UK users send and receive money by connecting their MobileCoin wallets to the accounts.

Signal focuses on the privacy and security of the new feature as always. The announcement post says about the Signal Payments:

“Signal Payments makes it easy to link a MobileCoin wallet to Signal so you can start sending funds to friends and family, receive funds from them, keep track of your balance, and review your transaction history with a simple interface. As always, our goal is to keep your data in your hands rather than ours; MobileCoin’s design means Signal does not have access to your balance, full transaction history, or funds. You can also transfer your funds at any time if you want to switch to another app or service.”

MobileCoin, the official partner of Signal in the new Signal Payments feature, is a privacy-preserving payments network designed for use on mobile devices. MOB is the native token in this service. As mentioned before, the Signal Payments feature is still in the Beta version and needs feedback and improvements to become ready for the public. We can expect a rise in user-base for both Signal and MobileCoin once the feature is ready for all Signal users.

0
It seems that some of the leading social media and instant messaging services are not willing to be left behind as the rest of...
Read more
- Advertisment -
Posting....