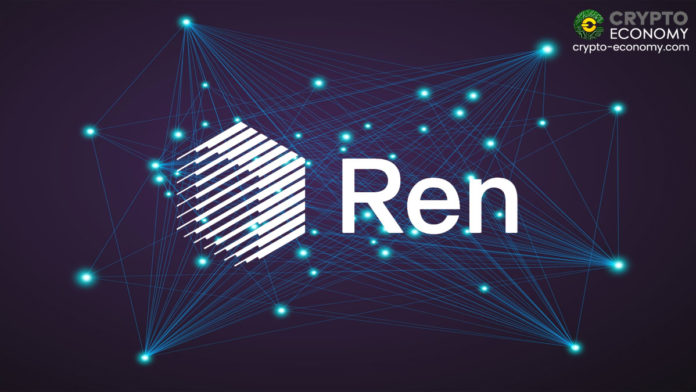 The Ren project, an open protocol that aims to bring interoperability amongst different blockchains has launched its core product dubbed RenVM (virtual machine).

The Singapore-based blockchain startup announced on Wednesday revealing that the RenVM is now able to support interoperability or value transfer between Bitcoin, Bitcoin Cash, Zcash, and Ethereum.

The RenVM has officially launched on the Ethereum mainnet with the first three wrapped tokens renBTC, renNCH, and renZEC representing the three blockchains whose assets are now wrapped on the Ethereum network. According to the announcement, RenVM works by wrapping tokens on a 1:1 basis on the ETH network using ERC-20 tokens.

“In simple terms, RenVM can be viewed as a decentralized custodian: it holds digital assets and then mints a one for one representation on Ethereum as an ERC20. While RenVM currently supports bringing digital assets to the Ethereum ecosystem, the same approach can be applied to other smart contract protocols like Polkadot and Tezos,” Ren explained.

Ren launched back in 2017 by co-founders Taiyang Zhang and Loong Wang who also serve as the CEO and CTO respectively. The company raised 35,000 ETH coins in an ICO that was participation from leading venture capitalists including Polychain Capital, FBG, and Huobi Capital. The company aims to bring more adoption to decentralized finance (DeFi) without reliance on centralized entities.

“What drew us to Ren is the founders’ vision for bringing decentralized finance into the mainstream of crypto, and eventually the global financial system,” PolyChain Capital’s Sherwin Dowlat said in a statement. “RenVM is an elegant solution for solving generic interoperability, and we’re thrilled to help guarantee the safety of RenVM by serving as a dark node in its semi-decentralized core.”

Zhang said that “successfully launching RenVM’s mainnet is a critical step in our long-term mission of creating a decentralized platform for DeFi that is self-sustaining and advances the industry as a whole.”

The founders of these two organizations have former associations with Ethereum, the leading smart contract platform. Interestingly, Polkadot and Ren have chosen to launch almost at the same time signaling a competition to launch in the market. Although Polkadot has only launched a version of their mainnet called a chain candidate release.