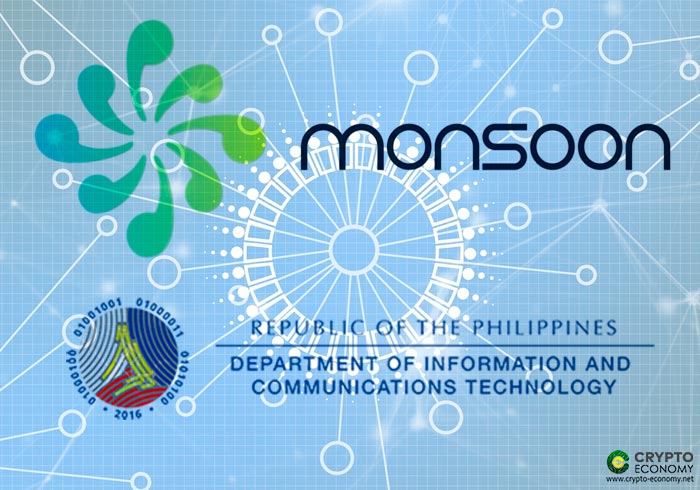 The Philippines Department of Information and Communications Technology (DICT) has announced the onset of a partnership with US-based blockchain company Monsoon that will see the Philippine government utilize the blockchain to ease business processes within the country as well as beef up its cybersecurity efforts.

According to a report by the Philippine News Agency (PNA), a government-sponsored news media:

Another report by GMA News media states that Monsoon will play the role of a general counsel on all matters concerning blockchain and how the Philippine government can use it to improve its business processes as well as strengthen its cybersecurity efforts.

Monsoon will provide DICT with “complimentary courtesy consultation, advice, cost-benefit, and socio-economic analysis” specific to how blockchain should be used in this regard.

In return, “The DICT will assist [Monsoon] on the information dissemination for blockchain technology, as well as capacity building activities.” This is more like the government asking for advice on blockchain from Monsoon in exchange for a platform on which Monsoon would reach the Philippine population to educate them and sell their services. “This partnership will directly benefit our continuous effort to address the country’s issues on ease of doing business and cybersecurity,” Rio said.

The Monsoon Blockchain Storage is a data company that is currently working on a version of Ethereum blockchain that will borrow aspects of the Ripple protocol according to its website. It states in its website that:

“it is developing its own Ethereum-based blockchain and native token technology.” And that “Ripple is a good model from a thought perspective of some of the goals of this new technology stream being added to our existing capabilities inbuilt over the last several years.”

It seems that blockchain companies partnering with established traditional entities is the way to take blockchain mainstream and showcase the myriad applications for the enigmatic distributed ledger technology.

Recently, Binance’s charity arm also partnered with a Ugandan-based not-for-profit organization to support the education of close to 100,000 pupils across Uganda. That is one way to bring awareness about blockchain to the masses.

However, perhaps the most recent and highly popularized event is the launch of the Facebook cryptocurrency and how the social media giant is partnering with several established companies to help launch its version of a stable cryptocurrency network dubbed Libra.