Musicoin aims to create new paradigm in the music industry

Blockchain technology has managed to permeate almost every industry, and music is no exception. The music industry has many intermediaries that are part of the “business”, among them record labels, publishers, which can make it difficult for musicians and composers to be adequately remunerated for their work.

Several companies are developing solutions that include blockchain technology to give musicians the chance to be rewarded directly for their work by selling their music directly to their fans without the need for intermediaries. One of these startups based on Blockchain technology is precisely Musicoin.

Musicoin aims to facilitate all major aspects of music distribution, copyright and royalty payments through the use of smart contracts, recorded in the Musicoin Blocks chain. Musicoin also wants to give fans the ability to decide how much they want to pay for each song of their favorite musicians, while every penny paid goes directly to the recording artists. 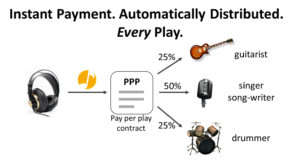 Musicoin was officially released on February 10 and will provide participating musicians with smart contracts that will allow them to automatically receive royalty payments each time their songs are streamed into the service. Payments will be made in their own cryptocurrency, the musicoin, which will not be tied to any particular sovereign currency to allow users from all over the world to buy music from their favorite artists.

The focus of this new streaming platform will be pay-per-play, where users pay, for example, the amount of a musician to listen to the new song of their favorite band.

The smart contract payment feature will not only automatically pay the musician or group of musicians, but will also allow the construction of smart contracts by the artists and the teams behind them. For example, if a payment of $ 1 comes for the transmission of a song, that payment, 20 percent can go to the lead singer, drummer, bassist, guitarist and song writer, respectively. This whole process would be encoded in the smart contract and would run automatically when the song was streamed on the streaming service of Musicoin. The beauty of smart contracts is that they can be upgraded to fit the needs of the parties they agree to hire.

“… artists control much more directly what they are going to pay and can come to their own agreements on what is worth ..”.

The native cryptocurrency of Musicoin is obtained through mining or data verification on its platform, and eventually, it can also be bought in digital currency exchanges according to the founders.

In general, Musicoin’s reception, from music producers to artists, was positive. Although the founding team believes that the transmission of a song will cost a penny, it does not prevent the developers, along with the musicians, create a streaming subscription service for $ 5 or $ 10 a month for music by specific artists, opening the platform Up to a different monetization range Models for artists.

Musicoin, however, is not the only startup that addresses the democratization of the music industry through the implementation of blockchain technology. Other start ups such as New York Ujo Music, which intends to use Ethereum and its smart contracts to remunerate artists directly when the fan buys their music. This start up allows artists to upload their content to various digital platforms such as YouTube, SoundCloud and Spotify, and then tracks all artist monetization channels so that all members of the creative team can receive their share their income in a very transparent way.

It would not be a surprise to see many musicians move their music to a new platform that could crystallize as new music streaming or downloading service. This is just beginning.