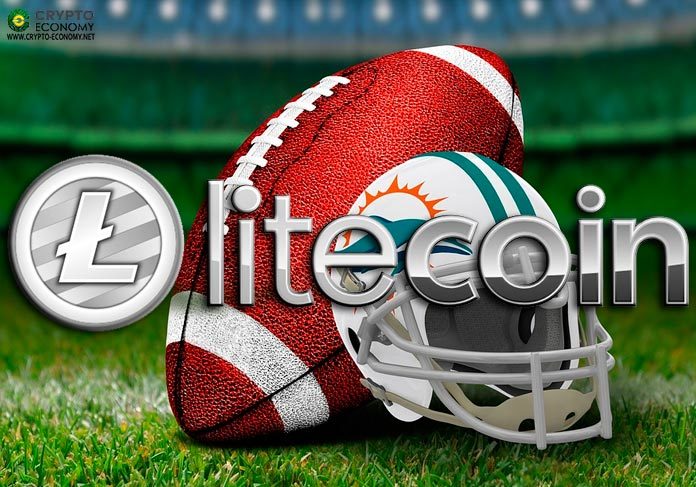 This partnership includes the blockchain payments processor Aliant Payments who together with Litecoin Foundation and Miami Dolphins will enable fans to purchase raffle tickets for the 2019/2020 season.

According to a press release by Litecoin Foundation on Friday, July 12th, the partnership “creates a powerful alignment between Litecoin and one of the world’s most recognizable sports brands in the Miami Dolphins.”

All partners have something to gain from the partnership. The Miami Dolphins will enable their fans to make ticket purchases in both bitcoin and Litecoin while sponsoring a noble cause through the Miami Dolphins Foundation.

“The Miami Dolphins are always looking for ways to enhance the fan experience, and this partnership with Litecoin provides the ability for guests to enjoy our 50/50 raffle while donating to a great cause.”

Litecoin is the fourth largest cryptocurrency by market cap trailing bitcoin, Ethereum and ripple’s XRP. However, both Bitcoin and Litecoin are not that much different as they are both based on similar underpinnings.

Charlie Lee, the creator of Litecoin may have borrowed a lot from Bitcoin, the flagship cryptocurrency with the only difference being the hashing algorithm used for mining either coin. Lee was especially enthusiastic about the partnership saying that:

“This collaboration propels Litecoin in front of an audience of millions of people around the world at a time where adoption of cryptocurrencies continues to gain momentum and the ecosystem is able to support real-world use cases in ways previously not possible. We see this as a powerful way to raise awareness and educate people about Litecoin and cryptocurrencies on a tremendous scale.”

Litecoin has been pushing its brand through sports teams and events over the past year. Last December, the Litecoin Foundation announced a partnership with the Ultimate Fighting Championship organizers that saw the Litecoin logo featured within a UFC canvas during the UFC 232: JONES vs. GUSTAFFSON 2 fight.

The latest partnership with Miami Dolphins will allow the foundation to place some strategic advertisements across the Hard Rock Stadium and the team’s online content platforms.

0
Litecoin Foundation announced a new token creation platform called OmniLite that can be the start of NFTs on Litecoin. But can be enough to...
Read more
Ethereum News

0
The Ethereum price is stable but down after September 8 steep losses saw the coin retest $3k. At this rate, the path of least resistance...
Read more
Chainlink News

0
Chainlink has been late to the party. For the most part, its price has remained stuck in a consolidative phase even while the...
Read more
CryptoCurrency News