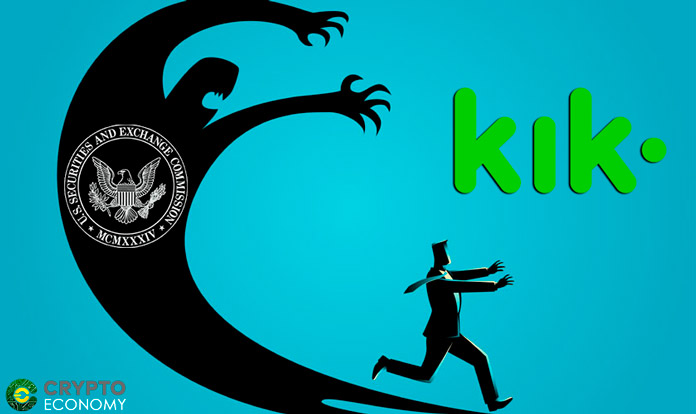 Ontario-based social messaging service Kik is downsizing. On top of that, it is dropping part of its product line to focus on the development of its blockchain-based KIN network token. Citing the legal lawsuit brought against it by US Securities and Exchange Commission (SEC) as the cause of the problems that have befallen the popular messaging service, its CEO Ted Livingston penned a blog post on Monday to announce the developments.

This is a direct impact from the SEC legal action.

Livingston said. The KIN ecosystem is shedding about 70 employees and preserving 19 core engineers to;

Ensure that KIN can scale to become the true currency of the internet going forward.

The SEC brought a case against the company on the grounds of violating the Securities Act by issuing the KIN token to investors which the commission considers a security. Kik Interactive, the company behind the Kik messaging platform and KIN token raised $100 million in 2017 through the ICO model of fundraising. According to the commission, Kik;

Deprived investors of information to which they were legally entitled and prevented investors from making informed investment decisions.

Kik in its part maintains that the commission has grossly misrepresented their statements from the 2017 ICO campaign as well as twisting the facts in their favor. Kik claims that the SEC lacks substantive evidence to back up their claims on the case.

Earlier this year, Kik launched a fundraiser for $5 million with the title “Defend Crypto” in order to fund its case against the commission. Kik has since handed over the reins to the crypto fund to a bunch of blockchain advocates under group “Blockchain Association” believing that they;

Will be in the best position to objectively allocate the resources to the highest impact initiatives.

In a recent development, it seems that Mr. Livingston is looking to quit the company according to a misdirected message seemingly sent when he was intoxicated from alcohol. In the message presumably to Kik board member William Mougayar, Livingston said that:

Will, I know I’ve been drinking, but this ain’t [sic] the drink talking, I’m [fed] up with this shit… We’ll talk more in the morning about replacement, but I quit.

He added a final message that:

I have my ticket. I’m not going to jail for this.

Livingston has not yet responded to these leaked messages but it seems clear that he may be gunning to jump ship as the going gets tough with the SEC case still in court.