Home CryptoNews Governments will invest in blockchain technology by 2018
CryptoNewsFeaturedRegulation

Governments will invest in blockchain technology by 2018

A study by the IBM Business Value Institute, titled “Creating Trust in Government,” found that most government officials who participated in the study are likely to follow the development of blockchain technology in 2017 and 2018. The survey covered 200 government leaders from 16 countries.

Ninety percent of government leaders believe that the block chain will have the most impact on legislative compliance as current systems and infrastructure established to enforce laws are inefficient in terms of time, cost, and labor.

Replacement of government regulatory and IT systems are being prioritized by US government organizations and leaders at the national level. By 2018, governments expect to cut the costs of enforcing regulations with autonomous and efficient block platforms.

One of the problems that government agencies are facing due to inefficient data-processing systems and servers is the provision of information between multiple parties. Most government agencies interact with organizations or companies in the private sector, transmitting large amounts of data.

Officials consulted in this study believe that the implementation of blockchain technology, smart contracts and timestamps can significantly reduce the risks and costs involved in maintaining shared databases.

For the time being, the US government’s focus on blockchain technology revolves around four key issues: citizen services, regulatory compliance, identity management, and contract management that require immutability and transparency. 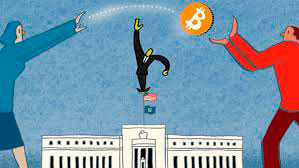 For the US government to see the development and implementation of block-based systems, it must follow the path of the UK’s Financial Behavior Authority (FCA) and offer local businesses the ability to Test their technologies on a commercial scale.

BTCManager, on 9 February, approved the approval of Tramonex, a London block branch, which allows the company to operate as a small issuer and facilitator of electronic money.

Government officials must collaborate with start-ups and developers to overcome obstacles such as security, transparency and immutability to ensure a path to more open and efficient government, driven by blockchain technology.

0
There are always comparisons between the size of Bitcoin and Ethereum blockchains and their data storage requirements, but they’re not always relevant. Some believe...
Read more
CryptoNews

0
NEAR Protocol has launched Nightshade Sharding on mainnet to start its transition to a fully-sharded blockchain and bring limitless scalability to the Near blockchain.
Read more
Bitcoin News