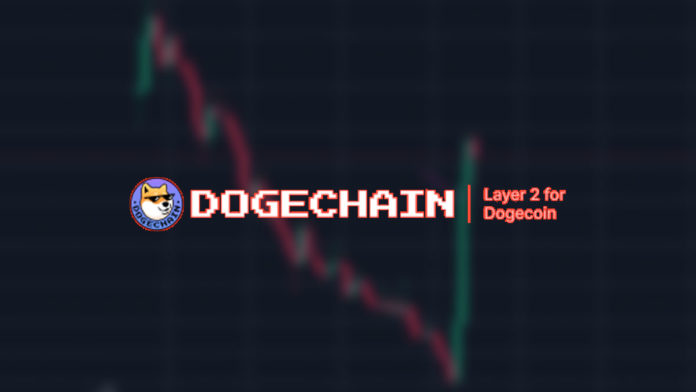 There are a number of crypto coins that have performed very well in the last few days, and Dogechain is one of them.

Several big pumps have taken place in the price of the currencies. There is another cryptocurrency that is a little bit further down the market capitalization list (number 394 on CoinGecko’s list), and that is Dogechain (DC), which a short while ago was the daily pumper for all altcoins, with a nearly 40% gain in the last 24 hours. Within the last seven days, it has gained more than 250% in value.

With the launch of Dogechain in August of this year, its technology is being marketed as the second layer of the Dogecoin (DOGE) network, and this will enable it to run Ethereum-compatible smart contracts.

There are a few things that this project aims to accomplish, namely that smart contracts will be brought to the Dogecoin community, and users will be able to bridge DOGE on the Dogechain network in order to use its applications, including AMMs with Uniswap-style (DogeSwap and DogeShrek) and maybe future NFT/GameFi offerings.

It is notable that Dogechain (DC) is now worth a lot more than it was at the end of August when it had lost over 90 percent of its value since its all-time high. In those two months, Dogechain’s value fell steadily from $0.004 to $0.0004 in a period of two months.

Why does it pump so much? This is very likely due to the fact that there are plans afoot for the Dogechain Foundation to burn down 80% of the DC token supply and also to dramatically reduce the vesting period for an airdrop for early supporters of the network.

Do you want the Dogechain foundation to burn 80% of the total supply and reduce the vesting period of Early Shibes airdrop from 48 to 6 months? YES/NO ✅ ❌

There does not appear to be any correlation between the Dogecoin value and the Dogechain value, aside from a spike in Dogecoin value that reached $0.086 on the same day Dogechain was launched. As of the day of writing, Dogecoin’s price has fluctuated between $0.07 and $0.06.

The fact of the matter is it appears that there can be a high level of trust in a coin by adding some practical use cases, even when we’re talking about meme coins. Likewise, Toshiba has shown excellent rises in its share price since it launched several platforms, such as Metaverse and Swaps, at the same time.

Whatever the case, many experts believe that meme coins, along with the ecosystems that support them, can become the world’s most popular choice for newcomers to cryptocurrency. As many critics have pointed out, there is no reliable whitepaper attached to these coins, but it seems the market is acting the opposite way, and many investors seem to prefer these coins in the long run.