FREED: the perfect combination of energy use, game development and blockchain

Among the applications in which blockchain has shown an excellent performance, are the developments of gammers platforms, a niche of indisputable importance and growth. This time we will talk about the FREED project of TVX Games, who with their proposal seek to integrate the computers of players in a decentralized global network.

Basically the idea of ​​forming this large decentralized network is to add the computational resources of the members of the network, and to monetize the use of said resources in favor of the users that place their capacities at the disposal of the FREED network. We have already seen this business model in another kind of platform, such as cloud storage, however it is an idea that may result.

A major problem at this time is that resources are distributed unevenly, and unequal distribution leads to wastage of unused resources. A perfect example of unequal distribution comes from the global diffusion of computational power. FREED seeks to reduce the operating costs of massive gaming networks. The principle of a distributed network helps perfectly in that purpose.

When users access the system and become part of it, they compensate the game publishers with the system currency, the FREED token. Game publishers in turn compensate players and users with the value resources of each game, such as the classic objects or coins of the game. FREED adds this to one of its objectives, which is to efficiently use the computing power and distribute resources in a uniform manner, ensuring that no energy is wasted. In summary, intelligent use of energy in an incentivized way and in an economically and technologically viable niche. 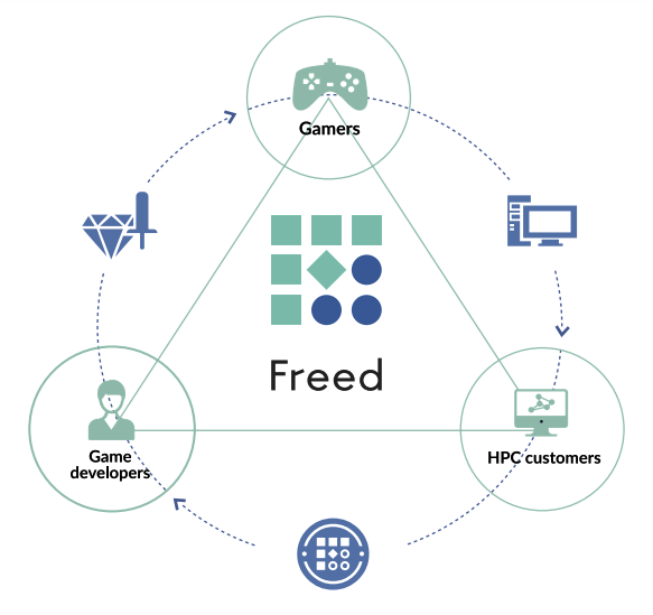 However, one of the real and practical reasons for the development of the monetization solution that FREED network offers is striking; for game developers, monetization in FREED can be more beneficial than the itself purchases in the game. This is so because many players around the world do not usually pay for the games and do not buy content within the games either. One way to encourage this change is to allow developers to use the FREED blockchain to use the computing power of players’ devices and devices, offering tokens in return.

FREED in its perspective brings together game developers, blockchain projects and players in a room. Game developers have a broad user base and can generate a great computing power, which is the raw material of the concept of this network.

The FREED platform is designed to help boost two markets: the gaming industry and the cloud computing market, with the basis of blockchain technology in a tokenized incentive concept.

The FREED token is an ERC20 token and is associated with the amount of computing power of the user in your network. The FREED token as a utility token that is, can be used as the in-game currency, and game developers can use the currency to reward their users.

FREED is a platform that benefits all members of the online gaming ecosystem while contributing positively to the environment. For details about your ICO presale, we recommend following them on your Telegram channel.