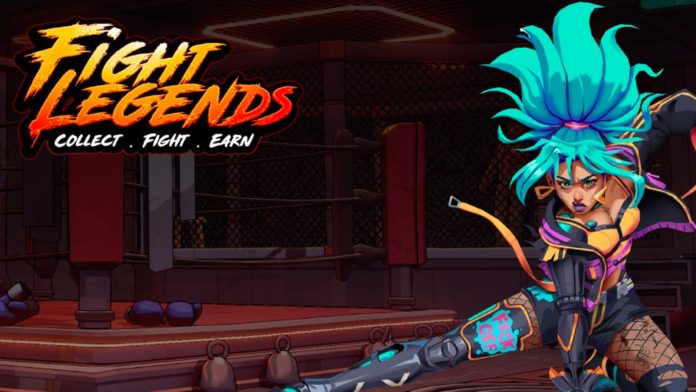 Fight Legends is a revolutionary new 2.5D fighting game featuring blockchain technology that creates an enjoyable and incentivized gaming experience for gamers of all levels and crypto aptitudes.

First and foremost, Fight Legends is focused on gameplay and mechanics that give play-for-fun users the ultimate experience, all while smoothly implementing blockchain technology.

So how does blockchain and NFT technology make Fight Legends so unique?

We want anyone around the world to be able to enjoy and participate in the Fight Legendsecosystem. All players have to do is borrow a Fighter NFT with our Free Hire mechanic fromanother player to begin earning!

The player using the borrowed NFT Fighter will split a percentage of their winnings with theowner of the NFT they’re using. This allows for saving up of earning towards purchasing their own NFT fighters which will unlock increased earning potential and more!

In our Arcade PVP mode, Fight Legends will offer new players a rotating roster of base-levelfighters to play with for free. To play with fighters in PVE utilizing their NFT stats beyond the base level though, players will have to either borrow Fighters to play with or buy an NFT fighter of their choice.

Here’s a quick rundown of the in-game NFTs and how they will relate:

★ Fighters – Fight and earn while training in your NFT Gym★ Trainers – Gives boosts to your Fighters training in Gym aswell as in-fight boosts★ Gyms – This is the player’s home base for all NFT assets. Hereyou train your fighters with the help of a strategic boost fromthe Trainer NFT the player chose to select for the role

So just how do you earn while utilizing all these awesome in-game assets?

Player versus Player (PVP) Modes are the epitome of fighting games and a huge focus of the development team. This mode allows for online play between human players competing for ranking and special blockchain-powered incentives that add a whole new level of playability and player retention potential.

An eSports-friendly mode is one of our two PVP modes. This mode will feature limited characters on a cycling roster designed for the eSports community. A mode where players’ skills and strategy are the keys to victory, eSports PVP mode is an important part of our roadmap as FightCoin plans to hold massive Fight Legends eSports tournaments livestreamed to millions!

Alongside this first mode is a second NFT Powered Mode. This mode will feature advancedstrategies and tactics. Fights, seasonal ranking, and special tournaments where the in-game NFT assets you own power everything! Players can play to earn in-game currencies, trophy NFTs and more!

These NFTs will have levels and stats which alter the gameplay mechanics and stats of theFigher NFTs they are applied to. This allows for players to balance out their favorite Fighters with specific NFTs that boost a certain aspect of their gameplay.

Excitedly, the dev team is also looking into a 2V2 PVP versus mode where you and friends in the same server region can fight on a tag team against other online players! Taking inspiration from MVC and other versus classics, the team is set on making PVP not only fun and efficient but more incentivized and inclusive for all levels of players in all server regions around the world.

Between PVP modes and the crossplay capability between pc and console, rollback net code is essential and will be supported to ensure smooth and fair online play. To further establish a fun and fair play a matchmaker ranking (MMR) system will also be implemented. That way, newer users get paired up with each other just the same as Fight Legends veterans. That way, everyone can learn the game comfortably before testing themselves against the best of the best in one of our PVP tournaments!

No matter what your gaming interests or skill level, the team at Fight Legends are building a next-level game for you, your friends, and the entire world to enjoy together, all while utilizing the future of the industry that is blockchain technology.

Players will gain these rewards to advance in-game by engaging in:

Super excited to check out the game and get playing as soon as possible?

There is one other NFT drop tied to the project that allows for early access to those who own it. Fight Legends’ initial NFT drop of 3,333 Bloody Faces earns access to the earliest playable demos and more!

You can become part of the community and enjoy all the perks including ways to win NFTs and $FIGHT coin! Just join our Fight Legends Discord and introduce yourself!

So join the Discord link below to join the community and learn more while the demo isdeveloped – https://discord.gg/6gKg5qYU

0
LuckyCrypto kicks off 2022 with a blast through its new bonus offer. Users taking advantage of the Welcome Limited bonus receive a 400% deposit...
Read more
Press Releases

Everything you need to know to convert TRX to BTC

0
If you are a beginner in exchanging cryptocurrencies, you could be wondering how to go about the conversion. You might think it's a quick...
Read more
- Advertisment -
Posting....