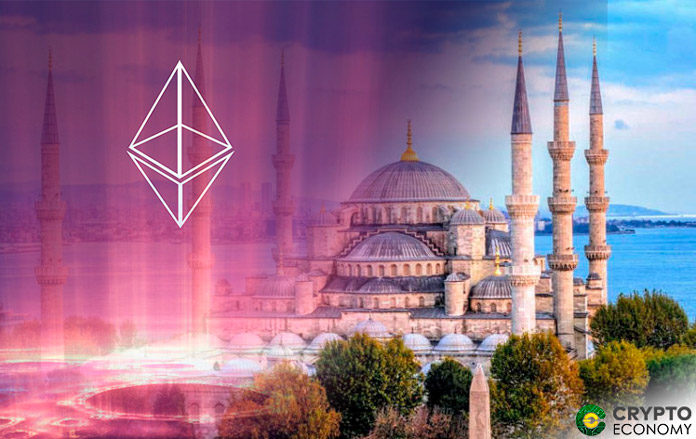 Ethereum Core developers have agreed upon a list of six EIPs (Ethereum Improvement Proposals) that will be included in the upcoming network-wide code upgrade to Ethereum dubbed Istanbul. According to the Istanbul roadmap, Istanbul was previously scheduled to roll out on August 14th, but as expected, the code changes were not yet ready and the hard fork was pushed back further to October this year. In addition, the Istanbul hard fork will be carried out in two sessions, Part 1 which is excepted to go live in October, and the second part scheduled for activation in the first quarter of 2019 (hopefully).

All six agreed-upon code changes will be implemented in the first part. Any other code changes that are still under deliberation including the controversial ProgPoW update (EIP-1057) will be considered for the second part of Istanbul. Speaking during a recent core developers’ call, Péter Szilágyi said that:

We split Istanbul into two. One of them we can actually ship within weeks. [The other contains] two really big EIPs that would be nice to have but require some stuff that cannot be done within the two- or three-week timespan.

Following this determination, the Ethereum clients developers such as developers of Geth and Parity, two of the leading Ethereum clients currently are expected to integrate the proposed EIPs into their client codes over the next week. Istanbul will be the 8th hard fork on the Ethereum network since its inception 5 years ago. The previous one, Constantinople was activated on the Mainnet on February 28th after facing several delays due to security reasons. Therefore, it is still early to conclude that Istanbul Part 1 will go live as anticipated in October. Szilágyi pointed out the possibility of further delays over the implementation of this hard fork considering that the code changes are yet to be activated on the Ropsten testnet.

With previous hard forks, after everybody implemented [to their clients], we had literally months of testing before rolling out to the testnet. Now, we just came up with a final list of EIPs and we want to fork in two weeks? That’s a bit brave.

He said on the Friday call.

Once the code changes pass the testnet phase, they will have passed the biggest huddle to implementation on the main chain. The testnet is necessary as explained by Ethereum Foundation community manager Hudson Jameson for testing the chain security features by perfuming stress tests on the code changes.

The security and stability of the network are primary concerns when it comes to doing hard fork on Mainnet so the testnet release is a vital step in making sure that Mainnet release goes smoothly.

Carlos Teodoro
Cryptocurrency enthusiast and everything they represent, Carlos is responsible for writing articles, creating images and belongs to the Crypto Economy team since 2017. He is also in charge of the commercial department, social networks and the revision of translations. Carlos continues to train every day to become an expert in the blockchain.
Cardano News