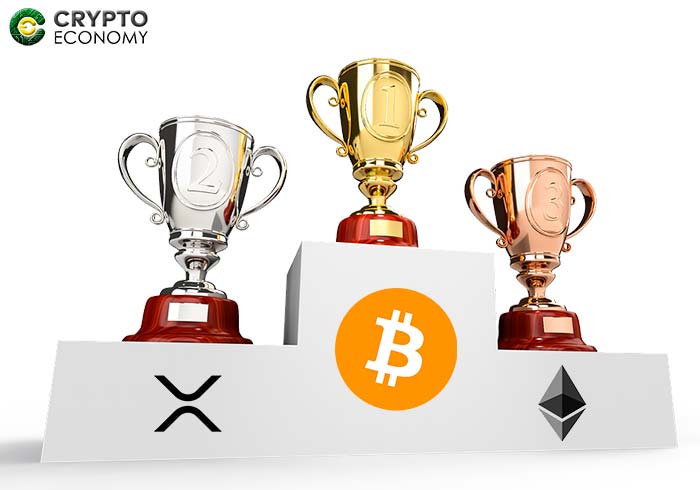 The bears are back in town and this time they have upset the order of altcoin rankings once again. XRP is back in number one position for most valuable altcoin while Ethereum [ETH] comes in a close second.

This follows a flash crash in the crypto industry following a Bitcoin correction earlier today that saw Bitcoin lose 9% of its value in the past 24 hours. The Bitcoin spot price is $3,667 down from ~$4,050 at the start of the day today.

Ripple’s XRP has lost less value compared to Ethereum and is now exchanging vale against the US dollar at $0.327 down from $0.38 representing a 10% fall in the past 24 hours. Ethereum is now priced at $127 against the US dollar down from about $150 representing one of the biggest loses in the top ten largest coins by market cap – a 15.7% drop in 24 hours. Bitcoin Cash is the other coin in the big five that has also had a major correction of 15.6%.

Currently, Ethereum is placed third after Bitcoin and Ripple’s XRP with a market cap of $13.29 billion. Bitcoin’s market cap is $64 billion while XRP’s is $13.43 billion a difference of less than $150 million. Ethereum’s correction represents the largest fall within a 24-hour period over the past 12 months.

This fall becomes the first time that Ethereum is losing its position as the most valuable coin this year to XRP. In 2018, XRP overtook Ethereum three times with the fall following the Bitcoin Cash hash war seeing it retain the #2 position the longest (more than a month). Before the end of the year, however, Ethereum experienced a bullish run almost doubling in value as its price rose from its mid-December lows of $85 to highs of $160 effectively reclaiming it lost mantle.

It seems this was short-lived as the space is currently highly volatile without a clear reason for the volatility. There is expected more downfall as Bitcoin seeks to find new yearly lows.