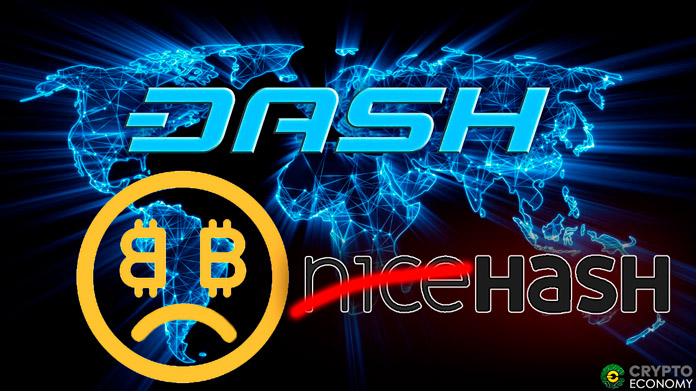 Dash cryptocurrency, one of the leading privacy-focused Bitcoin forks and also a top 20 coin by market cap is at risk of a 51% attack according to a Reddit user going by the handle u/Flenst.

According to his research, NiceHash, a Slovenia-based cryptocurrency cloud mining marketplace for hashing power, has accumulated hashing power to levels that are dangerous to the decentralized nature of the Dash network. A look at the CoinWarz statistics on the Dash network hash rate, Dash is averaging about 1.9 PH/s. Over the past 7 days, NiceHash has consistently maintained a hash rate of more than 1.2 PH/s which represents more 60% hashing power to the network. Yesterday saw the Dash hashing rate fall to a minimum of 1.67 PH/s while NiceHash’s hashing rate at this particular time was registered at 1.17 PH/s representing a massive 70% control of the hashing power.

According to Flenst, NiceHash controls three of the top four earning Dash addresses and likely controls the fourth as well. Despite the network being pseudonymous to an extent, the user was able to associate the top-earning mining addresses to NiceHash by analyzing the previous few thousand blocks mined on the Dash blockchain. He found that most of the coins mined were sent to the following three addresses:

His rationale on the three addresses discovered is that:

“This particular transaction has three of the four top addresses as inputs meaning one entity controls all three. These three alone gather 53% and more [mining rewards]. You can also see this started 6 months ago/around September last year, and I think the fourth unknown pool also belongs to this entity yet it is separated on the blockchain. It started to gather a lot of hash at the same time.”

Looking at the NiceHash graph on the amount of hashing power that the mining pool is contributing to the network over the past day, that figure has fallen by 60% and is now averaging about 500 TH/s. the Dash community is obviously worried about 51% attack following a similar attack on Ethereum Classic that saw the blockchain lose more than $1 million to double spending. Dash developers have been looking into integrating an update on their blockchain dubbed ‘chainlocks’ to prevent any one party from immersing such influence over the network.

0
Cryptocurrency gambling can be interpreted to mean two things: the first one being the most widely accepted interpretation of betting on cryptocurrencies. Often, investors...
Read more
CryptoNews

0
Sendsquare announced that the National IT Industry Promotion Agency (NIPA) of the Korean government had chosen it for a blockchain-based clinical project. The project...
Read more
- Advertisment -