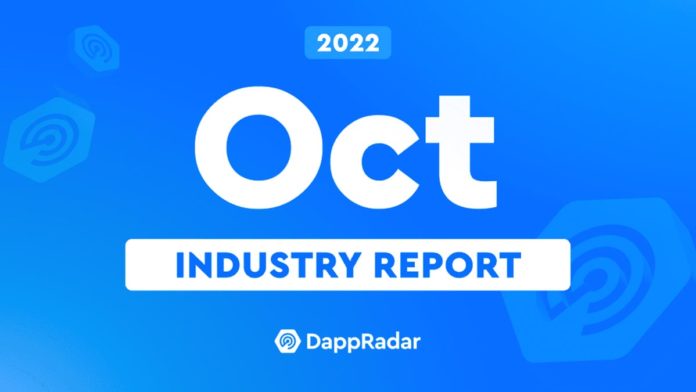 As per DappRadar, there is still a great deal of interest in NFTs, with the number of unique traders an impressive 18% in October 2022.

There were a total of 2.01 million wallets using blockchain dApps based on Industry Unique Active Wallets (UAW) in October, up 6.84% over September. Industry has once again demonstrated its resilience during uncertain times, as shown by this increase.

According to DappRadar, this growth was mainly influenced by a number of announcements that have been made this month, as well as several developments. As an example, adding Lido, the number one liquid staking system on Ethereum, was made available as part of the Layer-2 protocols Arbitrum and Optimism, resulting in a spike in unique active wallets of 501% and 83.31%, respectively.

Furthermore, NEAR Foundation and Google Cloud announced a joint partnership that resulted in a 1,332.85% increase in the number of User Acceptance Warnings.

It is interesting to note that this month, NFT trading volume in USD decreased by 30% from last month, reaching $662 million in the NFT sector. We have registered the lowest amount this year out of all the ones we have registered in the past. A month-over-month decrease of 30% in sales was also seen in the sales count as well.

Ethereum has continued to follow a downward trend in terms of its NFT trading volume over the past two months, and it is expected to continue. As a result of this decrease of 21%, the volume of NFT trading this month fell to $324 million, representing the lowest volume recorded since June 2021.

The sales count on the other protocols like Reddit NFT Collections, for example, showed a 109% increase from month to month. It has also been reported that BNB Chain has also experienced a 60% increase in NFT sales compared to September, following the same trend as Polygon.

There is no doubt that the global economy is currently facing formidable challenges, as DappRadar believes in this topic in its article. In light of this, some economists suggest that we might be in the midst of the earliest stages of a global recession. In addition, it would be safe to assert that, over the past many years, we have been in a bear market, but as the report indicates, there are signs of a recovery in this month’s data.