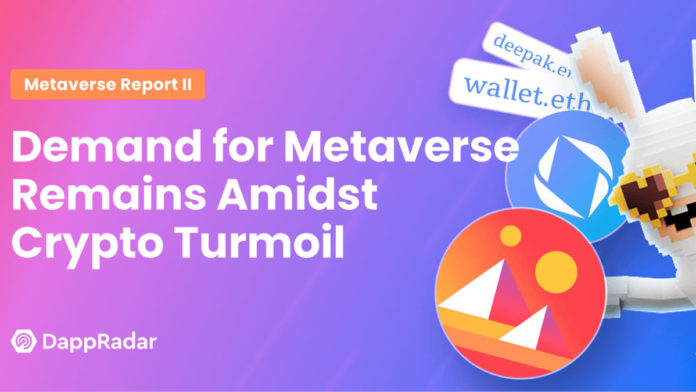 A report published by DappRadar explains what happened in the metaverse over the last quarter and analyzes key on-chain metrics.

Based on the report, blockchain activity was sustained in leading metaverse projects in Q3, according to the research. In May 2022, after one of the largest mint events ever seen in the history of NFT, Otherdeed for Otherside was the most prevalent metaverse project in the world.

As for the most active metaverse platforms that continued to be active throughout the year, The Sandbox and Decentraland continue to rank among the most active.

With an average of 750 wallets interacting daily with The Sandbox’s smart contracts on a daily basis since May, the gaming platform has maintained a high level of engagement.

There was an increase of 348% in the Sandbox Marketplace’s daily UAW in September, reaching 395 for the first time in many months.

According to another analysis, ten of the top metaverse projects (excluding Axie and Upland) have seen an average decline of 80% in USD trading volume during the third quarter due to a harsh macro environment.

There was $54 million in trading volume generated by Otherdeeds for Otherside for the third quarter, a decline of 92.70% when compared to the second quarter. Even so, Yuga Labs’ virtual world of gaming, Yuga Labs, hosted key events that were very important to the industry.

As part of the project, Improbable invited 4,300 testers, called “Voyagers“, for a tech presentation and a tour of the Improbable metaverse developed by the company in July. We conducted a few load tests in order to test the high-end metaverse technology M2 that Improbable uses on its products.

Additionally, it is also important to keep in mind that the demand for metaverse projects remains high, with only a slight decrease of 11.55% in sales count from Q3.

The metaverse, according to DappRadar, has the potential to generate up to $5 trillion in value by 2030, which means it is an unavoidable trend. The impact will have on the business world and on our personal lives is going to be profound.