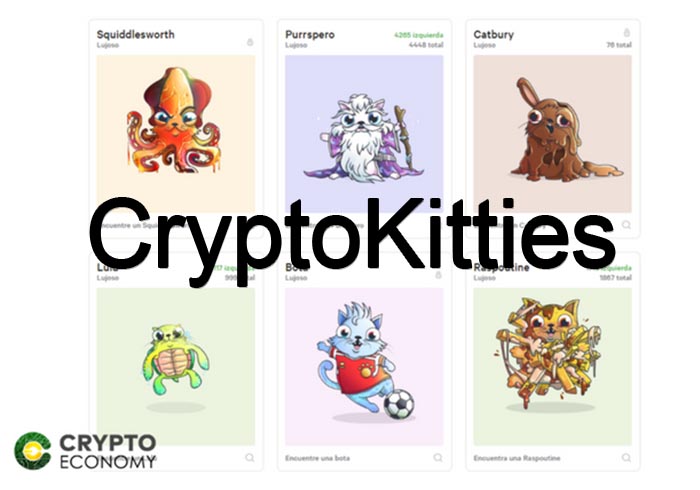 CryptoKitties is a game of digital cats, created by Launch Labs, Inc. (AxiomZen), where users can collect and breed creatures. Each of these virtual cats is different from the rest and its price depends on the characteristics and details of it, details that will make them more or less valuable.

Each creature is the property of the buyer and can not be replicated, stolen or destroyed without prior permission from the owner.

The peculiarity of this virtual game based on the blockchain of Ethereum is that, by maiting two CryptoKitties, they can create a new genetically unique offspring and unlock new attributes, some very rare.

To estimate its price there are specialized portals such as Kittysales or Cryptokittydex, where you can see the sale value of each cryptocat and its genetic details.

This game handles a mechanic similar to the game Pokémon. Basically it consists of buying, breeding and collecting a series of cats, which can be breeded and generate new creatures. In this way they inherit the features that will influence the price of each one.

The most expensive CryptoKitty

It should be noted that the most expensive CryptoKitty was “Genesis”, the first cat generated on the platform, which was sold for 246 ethers, the equivalent of $114,000 at the time of the sale, in December 2017.

CryptoKitties is an example of Ethereum’s potential regarding other apps, it is one of the first games in the world based on blockchain technology.

Although it is not a cryptocurrency such as Bitcoin or ETH, it is a cryptocollectible, which operates as a non-fungible token (NFT), so it can be bought, sold or exchanged with traditional procedures, under the same security policies of the blockchain.

How do CryptoKitties work?

To start you should use a MetaMask wallet (Ethereum wallet that is installed through a pluggin in different browsers).

Once we have a Metamask wallet, you need an ETH balance to create a CryptoKitties account from the official website by selecting the Start Meow option.

In the App portal you will see a guide that shows you the next steps to follow and once the add-on is installed where you will have the wallet, you can start the game.

The accounts are directly affiliated with a public key, being the only way to deposit.

Payments are made with MetaMask through its extension on Google Chrome or Firefox, which are the only allowed browsers where money can be sent and received to and from Ethereum wallets.

It is important to point out that, just like with the rest of the virtual wallets, after the registration, the seeds and the private key must be kept in a safe place.

How do I buy CryptoKitties?

When you access, you must deposit in the MarketPlace. At first you will not have any kitty and you will have to buy one that suits your budget.

These are ordered from lowest to highest price. You can select the category that varies according to age; young or old, or according to the price; more or less expensive.

All cats have a generation number and a series of reproductions. Those of “Generation 0”, are the most special because they are created by the web and are a pure breed, becoming the main objective of any collector.

Each cryptokitty will be born according to the characteristics of the parents, and depending on the cooldown (reproduction time) that it has will influence the duration of the gestation period for it to be born.

To breed there are several options:

Put the cat to rent.

This way someone has to pay the rental price for them to breed. The more incredible the CryptoKitty is, the more desired it will be to match it with another. When renting we must take into account that the person who rents it keeps the new baby, and the other person keeps the money.

Breed with another one of our CryptoKitties

On the other hand, it can be paired with another one of our CryptoKitties to obtain a new breed indifferently to its relatives.

0
Flow blockchain is a PoS-based fast, decentralized, and developer-friendly blockchain by NFT pioneer Dapper Labs that aims to provide high scalability to the next generation of Dapps without the use of complex scaling techniques like sharding.
Read more
Companies

0
Anyone who ​signs up for a Dapper Wallet through Decentraland's Builder​ will be gifted their very own Purrstige CryptoKitty! . The new feature in the...
Read more
CryptoCurrency News

0
Dapper Labs, the creator of blockchain gaming fame CryptoKitties has released a new kind of crypto wallet that makes use of a smart contract...
Read more
CryptoNews

0
Ethereum CryptoKitties creator, Dapper Labs has announced the closure of a funding round led by the Venrock – the venture capital firm associated with...
Read more
CryptoCurrency News

0
Everyone knows that Internet is ruled by cats. Whether in video, memes, comments or a dedicated subreddit, felines have taken over the virtual world...
Read more
- Advertisment -
Posting....