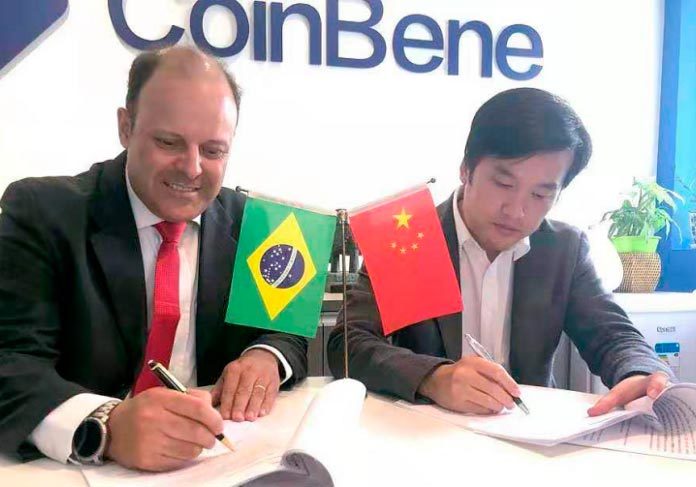 CoinBene in partnership with MasterCard Global will be launching a cryptocurrency card this September that is targeted at the Brazilian and Chinese demographic. In an announcement this week, the popular cryptocurrency exchange wrote a blog post stating that users of the new card will be able to carry out cash withdrawals, cashback, payment of bills, and direct money sending between users within Brazil or China and between users across these two countries.

According to the announcement, this card will be launched in celebration of the 70th anniversary of the formation of the People’s Republic of China. Basically, it is an ATM card that only supports cryptocurrencies.

Users will be able to make deposits to their cards through the CoinBene account, through bank transfers or by using tickets.

There are more than 300,000 Chinese immigrants living in Brazil who the card is squarely aimed at on top of the millions of Brazilian locals in the country.

In China, the card will be integrated with the popular social media service WeChat which currently has more than 1 billion users in mainland China alone. The card will integrate with WeChat’s Pay application. Both China and Brazil are active cryptocurrency markets which should make it easier to gain adoption for the card in both countries. CoinBene estimates that at least 8% of the Brazilian population aged between 16 and 24 are active cryptocurrency users.

According to the announcement, card users will be able to make cash withdrawals at ATM machines across Brazil with the label “Friendly Withdrawal.” There could be in excess of 15,000 of these machines across the country.

“Just take your digital account app into the store, enter the amount you want to withdraw, read a barcode and you’re done! The checkout counter will make available the amount chosen.”

In addition to the several benefits highlighted above, users of the CoinBene card will be able to enjoy a cash-back feature. In this case, once a user has made a transaction at a select merchant store, they will be legible to claim a cashback of between 1 and 10% which will be credited back to their Card account to be used for other payments of even be withdrawn at any ATM stated above.