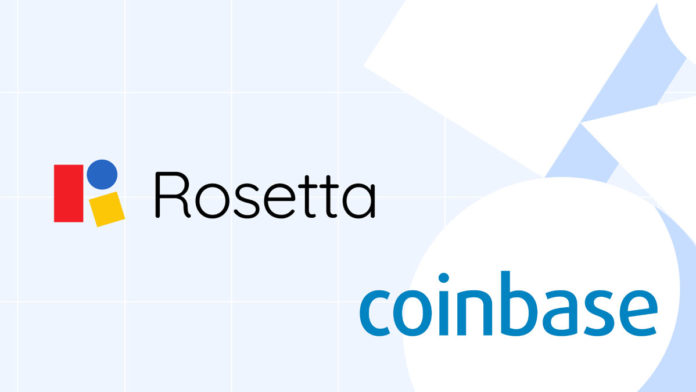 Major US-based crypto exchange Coinbase has launched its “middleware” blockchain integration toolkit dubbed Rosetta which the exchange uses to onboard new blockchains to its platform.

It is a set of specifications and tools through which blockchain developers can use to make their projects more acceptable to being listed on the Coinbase platform. In a blog post on Wednesday, the exchange announced that it has released Rosetta to the open-source community allowing any exchange, blockchain developer, and other interested parties in integrating the toolkit to their work. The idea being that if more exchanges and developers integrate the framework, it will lead to more interoperability and cohesiveness in the blockchain space.

Before Rosetta, projects could take months to be listed on the Coinbase platform even after being on-boarded simply because they had to customize their code-bases to adhere to listed specifications on the platform. Customizing for a single platform such as Coinbase, although tedious could be tolerated, however, what makes the listing process even more cumbersome is the fact that different exchanges, wallet services, and block explorers use various listing specifications.

This necessitates the customization of the code-base of different projects to all these different services. IT is a lot of work for developers leading to long listing periods for startups especially those with limited resources to hire more developers to create these custom provisions.

Using Rosetta, Coinbase hopes that more blockchain entities will be able to adopt the specifications and create a more standardized ecosystem. Expectedly, this will lead to fast listing periods and less code to be written. It is a win-win situation for all concerned parties. Listing platforms will benefit from quick listings and support, while developers will have less work to do. Exchange customers will also benefit from standardized feedback and information on their tokens.

“For the broader community of crypto developers, Rosetta makes it easier to build cross-blockchain applications such as block explorers, wallets, and dApps. Instead of writing custom parsing for every supported blockchain, applications can use a blockchain project’s Rosetta implementation to read on-chain data and construct transactions in a standard format; minimizing code and simplifying maintenance,” Coinbase’s Chief Product Officer Surojit Chatterjee explained in the blog post.

So far, Rosetta has attracted the contributions of some blockchain heavy hitters such as Filecoin, Oasis, Celo, Near, Coda, Ontology, Kadena, Handshake, Blockstack, and Sia. Celo co-founder Marek Olszewski commented on the launch of the Rosetta open-source saying that “it is an exciting development in the cryptocurrency space that helps establish a standard API for integrating and building applications on blockchain networks.”