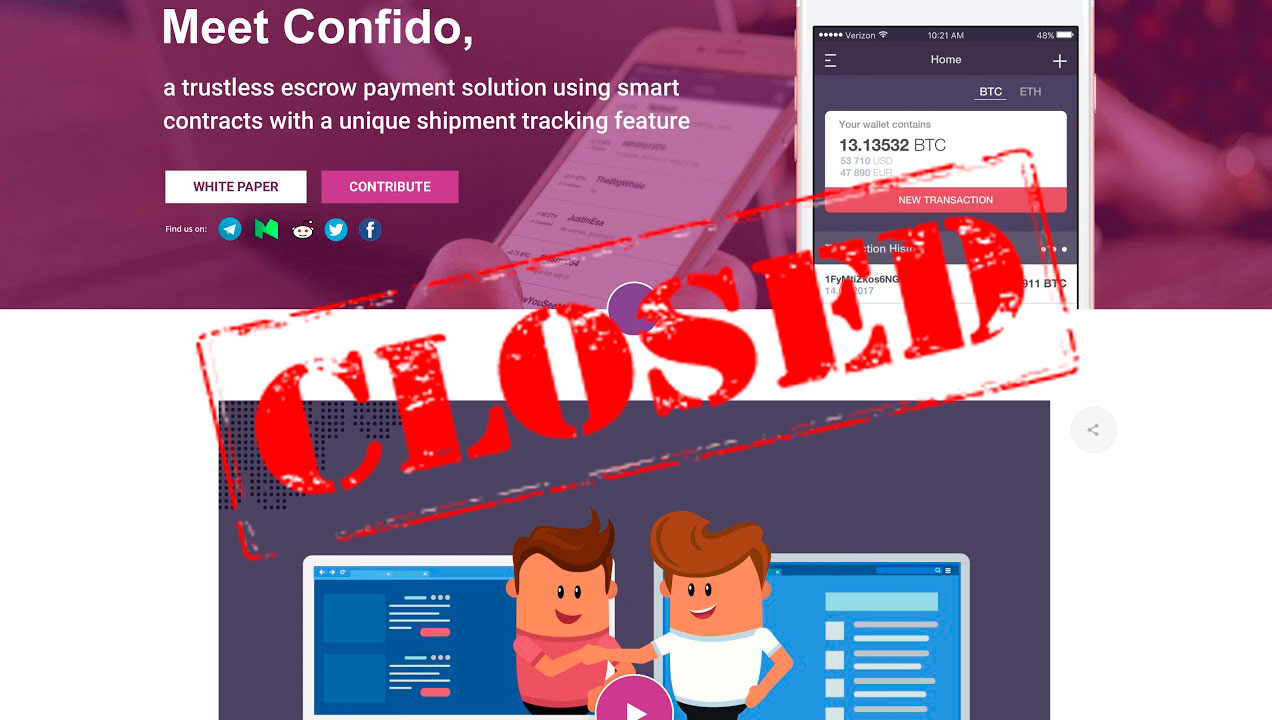 It seems that the Ethereum-based startup Confido, have vanished out of thin air by shutting down all of its social media profiles and even their official website. This event takes place shortly after finishing their Initial Coin Offer (ICO), which rose to $ 374,000 in just three days.

Investors that participated on this cryptocurrency’s ICO headed over the social web platform Reddit, to discuss about what could’ve been an “exit scam”, as the company’s profiles held in social media like Facebook, Twitter, Medium and even Reddit, have been taken down, amid confusion regarding a statement made by their CEO, Joost Van Doorn.

In his note, Doorn apologize to investors and explains that they’re involved in a legal issue, as consequence of signing a contract that “had minimal risks and it would not be an issue”, according to their alleged legal advisors. However, what triggers everyone’s alarm is that, shortly after this post was made public, all of the contents in their named profiles, including that same post, were eliminated.

In the other hand, a Confido representative went out to state that he, too, was surprised by the news, without finding a reasonable explanation as to why such a delicate decision was made, although he said he have contacted Doorn to talk about the subject, guaranteeing that a solution for this problem is being searched.

Even so, investors look worried about lack of truthful information regarding all the members of the Confido’s directive, as the situation concerning their individual profiles is similar, accused of being false, while CEO’s LinkedIn profile was deleted a couple of minutes after the announcement.

Taking action in the subject

About the situation, TokenLot – the firm that host and manages ICOs of startups – confirmed that there’s currently an investigation ongoing, with support from cryptoexchanges Bittrex and KuCoin. The former discovered that all the tokens collected were sent to an account in their platform, which belongs to a verified user but, because of the company’s privacy policy, can’t submit any customer information without a law enforcement request, so a report is being filled with the U.S. Federal Bureau of Investigation (FBI).

Meanwhile, the latter, that have added the startup’s token (CFD), said that after holding conversations with TokenLot, decided to suspend tradings with this cryptocoin, which contributed to the downfall of its quotation, going from $ 1.2 to barely $ 0.02 per token

Confido was defined as an Ethereum-based payment processor that allowed smart contracts to work as automated escrows. Their tokens could be traded for Ether. But now that almost all that was related to it, investors can only sit back and wait for any further statement made by either authorities or Confido’s representatives.