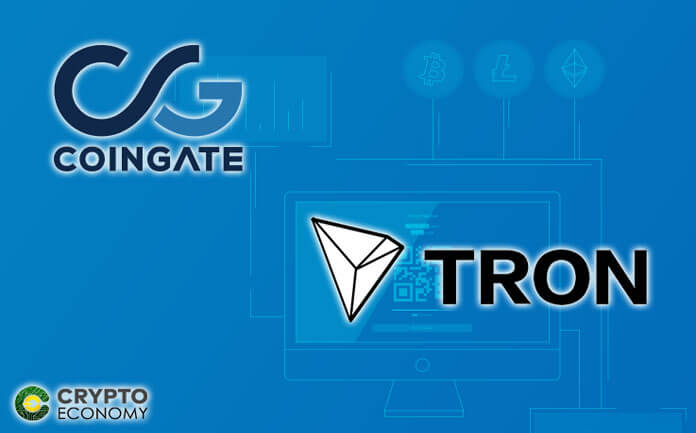 CoinGate, the online crypto platform that provides merchant services to businesses and individuals recently announced the addition support for TRON (TRX) allowing merchants who use the gateway to accept TRX payments. Apparently, CoinGate decided to add TRX due to the increasing adoption of blockchain technology and developments made by the TRON Foundation.

TRON is a blockchain platform launched as the foundation for a decentralized entertainment ecosystem. The platform basically focuses on expanding the market of decentralized digital content apps by making it easier to create and deploy them. The TRON Foundation has made quite bold and major steps towards the promoting the adoption of blockchain technology.

One major development made by the TRON Foundation is the improvement of software infrastructure with effective scalability, accessibility, efficiency and performance. The TRON blockchain consumes less energy due to the fact that it is based on Proof-of-Stake rather than Proof-of-Work.

Just like its rival, Ethereum, TRON provides the ability to build smart contracts, deploy DApps and issue custom tokens on its network. TRON has shown great ambition towards rebuilding the World Wide Web and creating mass adoption of the blockchain technology, an attribute that makes the coin’s future very promising.

CoinGate is a cryptocurrency payment gateway for blockchain payments. The platform began in 2014 with a mission to grow adoption of cryptocurrencies on a world wide scale. It therefore provides a reliable payment infrastructure that caters for the needs of merchants and their clients across the globe. Supporting TRX is an example of how the platform accomplishes its aim to create mass adoption of crypto coins.

The platform not only supports TRON, but also Bitcoin and over 50 other Altcoins such as Ripple, Ethereum, Dash, Litecoin, etc. it also allows individuals and organizations to trade Bitcoin (BTC) in the digital currency market. The customer-oriented platform offers embeddable plugins, POS systems and payment buttons to streamline payment processing.

0
After signing a partnership in February 2020, Steemit and TRON are closer to integration. Their new move will help users to earn more versatile...
Read more
CryptoCurrency News

0
With the recent DeFi boom, the crypto community is now seeing other digital assets beating the price movement of Bitcoin as according to eToro’s...
Read more
Tutorials

0
Staking is one of the most significant financial incentives in the cryptocurrency ecosystem. Many cryptocurrencies work on the proof-of-stake protocol and offer rewards to...
Read more
CryptoCurrency News