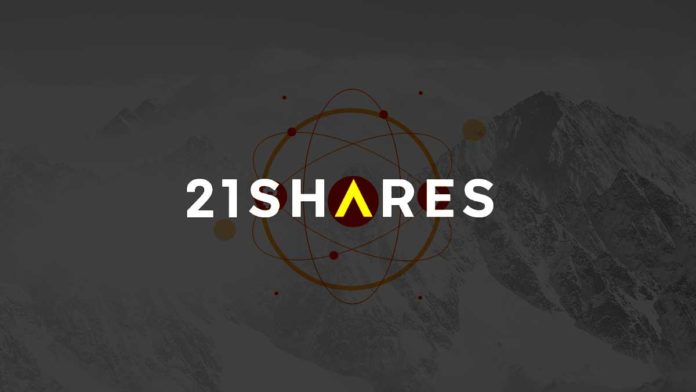 According to a press release on July 1st, 21Shares announced its new product purportedly the first physically-backed Bitcoin ETP in Europe. 21Shares announced that the new ETP would be listed and start trading on Thursday, July 2nd.

As reported by Crypto-economy on Wednesday, this is not the first ETP by 21Shares following a slew of similar products by the asset manager since its launch back in 2018.

Coinbase, one of the leading cryptocurrency exchanges in the US announced its new contract with 21Shares on Wednesday soon after 21Shares’ announcement. According to the release,

Formerly, Kingdom Trust has been holding 21Shares assets and this means that this will no longer be the case. 21Shares may be moving all their custody business to Coinbase Custody including assets backing its other ETPs such as Ripple, Bitcoin Cash, and the inverse bitcoin value tracker.

“Coinbase is committed to serving a wide spectrum of institutional clients and we are excited to be the chosen custodian for the 21Shares Bitcoin ETP, Europe’s first physically-backed bitcoin ETP,” Coinbase announced.

21Shares CEO Hany Rashwan said in a statement that:

“21Shares is delighted to bring this historic product to Europe. We are honored to give investors access to the best performing asset class of the last decade and we believe the next ten years as well, through our simple, transparent, and regulated crypto ETP product suite.”

21Shares’ 11 ETPs are listed across three major traditional exchange platforms. Some of these are dual-listed on both SIX and Boerse Stuttgart and now the asset manager is expanding its reach to access Deutsche Borse’s investors. SIX is the leading exchange platform in Switzerland. The latest listing according to 21Shares’ Managing Director Laurent Kssis is a move to increase the exposure of their assets to a wider audience.

“The listing on Xetra not only strengthens our current position in Germany but also opens up institutional-grade crypto products to the wider European and international markets,” he said on Wednesday.