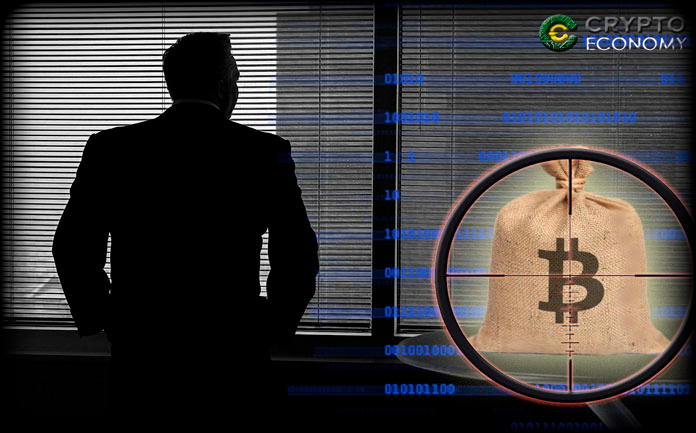 Anyone who is familiar with the stock market will be aware of attempts by public figures, institutions and large capitals to manipulate the prices of assets for their own benefit or that of third parties, despite this being a practice that undermines the fair functioning of the free market.

And although this dishonest practice is heavily regulated or directly prohibited, as in the case of the United States, by Section 9-A 2 of the Securities Exchange Act of 1934, it is not uncommon for us to read in some article that Warren Buffett has said he is betting heavily on an asset, or George Soros recommending buying a certain currency.

That is why when we move to the new markets of cryptocurrencies, lacking such regulations, we observe that this type of manipulation has a green card to proliferate without anyone to investigate or sanction it.

Since Jamie Dimon declared Bitcoin to be a “stupid fraud” in September 2017, many facts and speculations have gone against what some financial institutions publicly declared.

Now, close to the launch of BAKKT, a platform created by the NYSE, Microsoft and Starbucks that will allow institutions to buy, sell, spend or store digital assets, it is difficult not to realize that there is a growing interest in this asset class by large corporations.

What is interesting about BAKKT is its approach, as it will use the futures market infrastructure to be able to offer Bitcoins on its platform, but backed up with real bitcoins. For this to happen, they must have a minimum amount of this asset, but when were they bought? What trading volume do they expect to have? Is it possible to find out?

Unfortunately, these data are difficult to obtain, because if they were, this type of operations would be done over the counter (OTC) or what is the same, outside the exchanges so as not to interfere in the price, since an institution that acquires thousands of bitcoins in a reduced period of time would raise the price of the BTC against its own interests, making it increasingly expensive each bitcoin it acquires.

Fortunately Bitcoin is, among many other things, a public distributed accounting book which any user can view all the transactions that have been made since the first block, aka Genesis Block. Therefore, with the appropriate knowledge and a long time ahead, conclusions can be reached that help to make a conception of the real picture and speculate on the financial institutions that could be behind the large movements of capital.

To this end, we have studied the movements of the 10,000 largest Bitcoin wallets since Jamie Dimon made the aforementioned statement.

The investigated wallets have been those created since September 2017 and have only deposits, but no withdrawals. Why this kind of wallets? Because if they are going to offer Bitcoin futures with a real backing, they have had to acquire them, or at least change hands, generating these Bitcoin deposit movements in newly created wallets, with new owners.

What has caught our attention in this study is that there are a series of incoming transactions towards wallets that have no withdrawal, of exact amounts (200, 500, 1000, 2000 BTC) that coincide exactly in hour, minute and even second, which leads us to believe that they are operations carried out by automated algorithms, also known as bots.

We began to study the data to find some kind of pattern, which allows us to deduce that some kind of accumulation is occurring, so we counted the portfolios that were for each amount of bitcoins in possession. 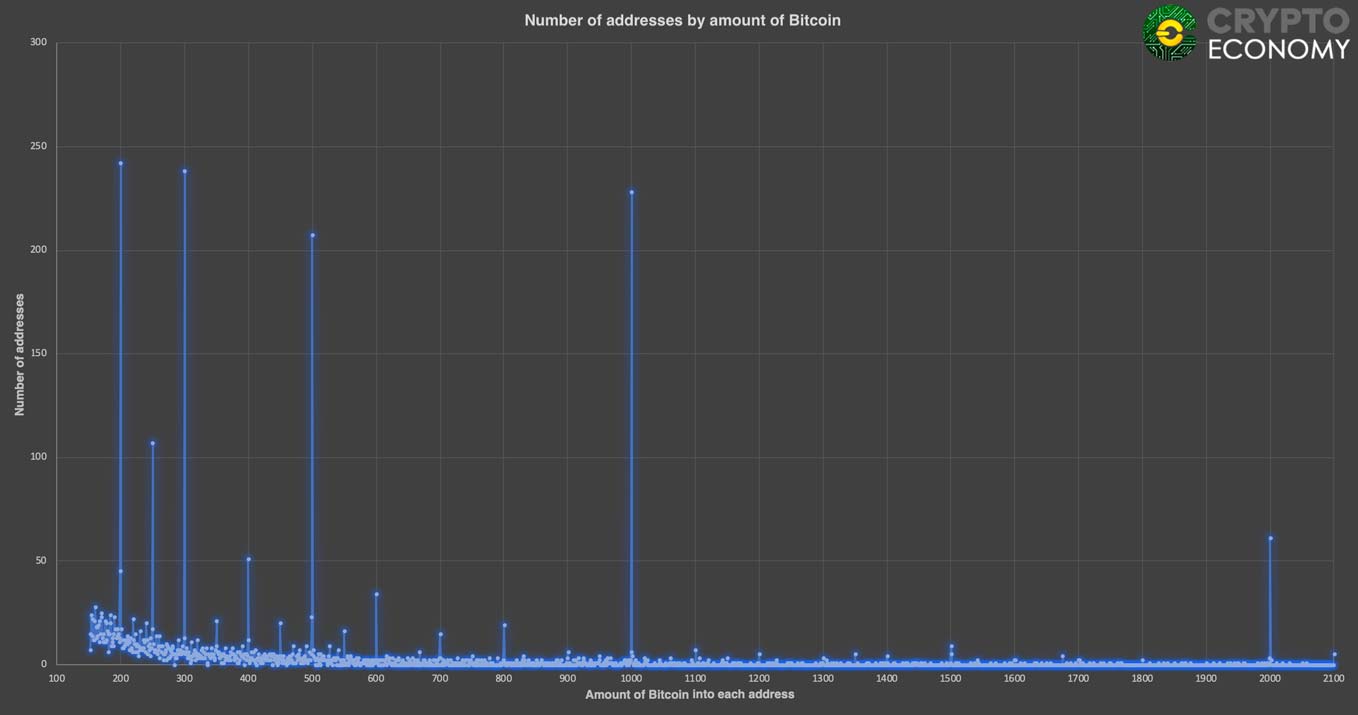 As you can see, the fewer bitcoins in the portfolio, the more accounts we have. As we move to the right of the graph, as the number of Bitcoins increases, the number of portfolios with this number decreases.

The graph follows an exponential distribution, however, there are certain quantities that stand out above what would be a normal behavior regarding this distribution. If these values were random, i.e. if the market belonged to a large number of stakeholders, they should approach the trend line, however, it can be seen that this is not the case. In other words, there is no randomness and less, if we take into account, that the values that stand out above the others are: 200, 300, 500, 1000 and 2000… psychological numbers, which humanize this behavior.

But let’s stop talking about the number of accounts according to the bitcoins they own. Where you can really see what kind of investors can be behind this behavior is studying the data based on price.

Analyzing the behavior of creating new portfolios, we have come across this:

This graph shows the number of wallets created per day, in blue, compared to the monthly average, in orange.

November 2017 saw the creation of these type of wallets almost tripling the previous months, just before the big increase we experienced at the end of the year. The average monthly creation of these portfolios decreases progressively until May and June, the latter remaining above the average for September and October 2017.

From July of this year, a progressive increase in the number of creation of these wallets begins, coinciding with a period in which the price of Bitcoin remains lateral and with short periods of panic (between 6000 and 6500 dollars).

In October of this year, as can be seen, the creation of wallets skyrockets, comfortably surpassing the values produced during the boom of November and December 2017, observing an increase of more than 150% in the creation of this type of portfolios.

Perhaps the ordinary investor has a sense of stagnation of the price of Bitcoin, with a negative perception, but it seems that large capital is betting in the medium / long term for this asset, at least as far as portfolio creation is concerned.

While it is true that the increase in the creation of such portfolios can be a good indicator, by itself tells us nothing if it is not accompanied by a study of the volume of bitcoins that move, so let’s get to it:

Here you can see the number of Bitcoins that are being stored in newly created portfolios, which have had deposits and no withdrawals.

As can be seen in the graph, a storage volume comparable to the values of November, December and January has been maintained since July. 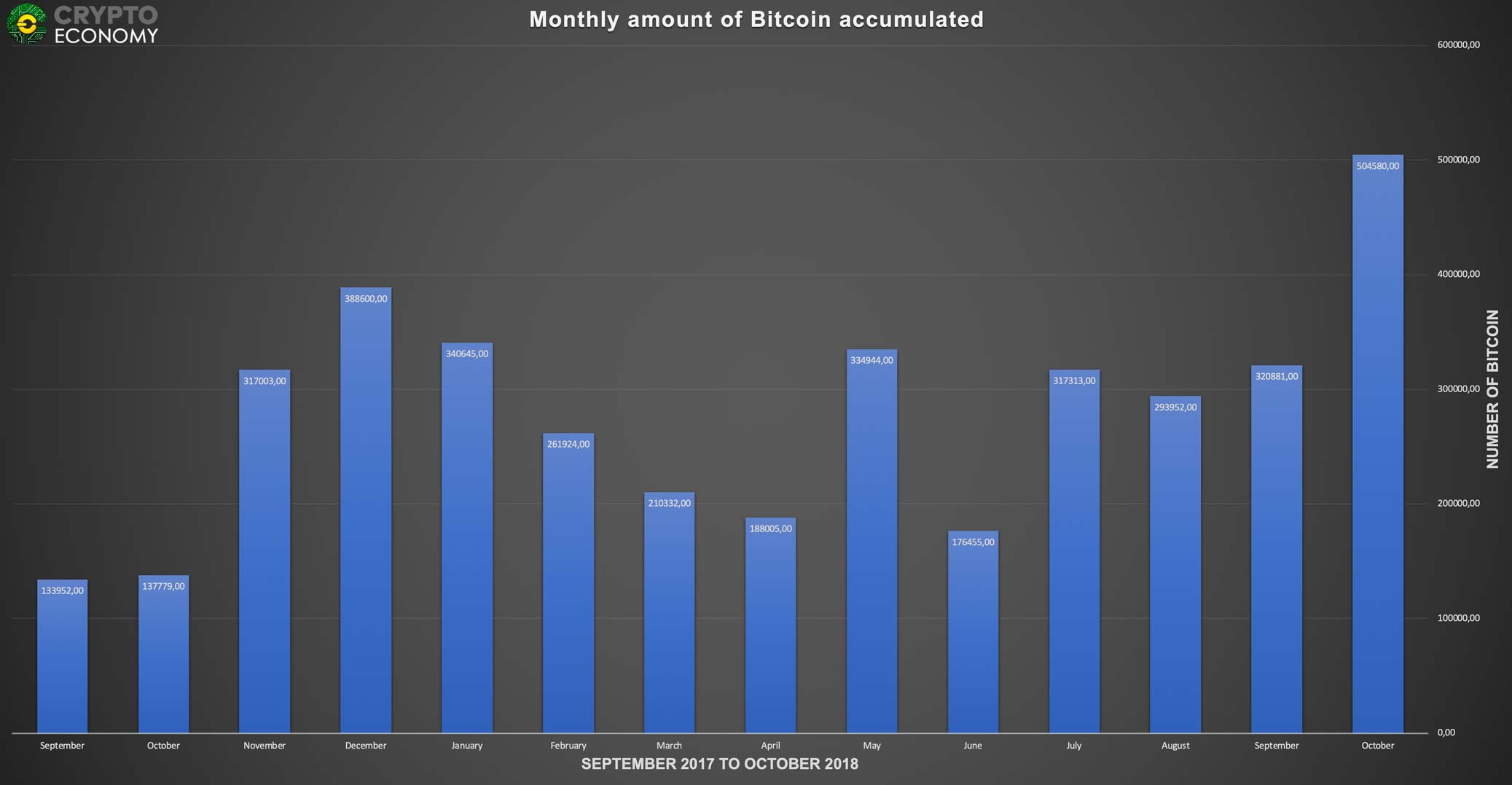 In October of this year, the number of bitcoins stored was higher in units than in any previous month, rising from 500,000 units of bitcoins.

Evidently, part of these wallets will belong to Exchanges, but even they, and taking into account the largest, have cold wallets not accounted for in the volume studied below 140,000 Bitcoins, which, compared to the volume of Bitcoin that has been stored over the last 13 months, are quite far from having the economic capacity to accumulate about 4 million bitcoins.

On the basis of the data obtained we can estimate, according to the usual behaviour of large capitals, that there are large fortunes accumulating bitcoins, coinciding with a market framework in which small investors disengage from their positions and interest in cryptocurrencies is notably reduced, refirming the accumulation phase prior to a distribution phase.

We do not know who is behind these purchases, but what is clear is that in the market there are new figures with great financial capacity who have bet in the medium/long term for this digital asset.

Author of the study: Carlos Delgado. Student of Finance and Accounting at the University of Zaragoza, Spain.

If you want to see the complete file of this analysis, you can download it here.