Bitcoin in a bubble?

Given the prices bitcoin has reached, many experts are of the opinion that Bitcoin is in a massive speculative bubble.

All the signs of a massive speculation are present. And before such an event, prudence must be fundamental. Through the experience of the last decades, every time we witness a similar phenomenon – bubble – the end is usually not happy.

On the other hand, a germ of mistrust persists, and not without reason, in many bankers for fear that the criminals will use the anonymity of bitcoin to participate in nefarious anonymous activities.

Jack Tatar, co-author of the book Cryptoassets: The Innovative Investor’s Guide to Bitcoin and Beyond says that we’ve already seen bubbles come and go with bitcoins and that it’s still a very young class of financial assets. He argues that as investors better understand bitcoin and cryptocurrencies in general, we will see more efficiencies in the markets. He also believes that “Every investor who participates or considers cryptography needs to recognize that there is little research or advice available … If you do not understand it or could not explain it to a friend, do not invest in it”. 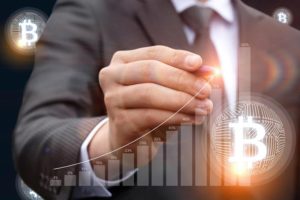 Some experts also agree that cryptoassets should be considered an alternative asset and should not be more than 10-20 percent of the total portfolio of an investor, but this is somewhat variable according to the individual investor and its objectives.

However, the current circumstance of massive speculation could motivate an increase in regulatory activity by some governments. However, this could be counterproductive, since the nature of cryptocurrencies is absolutely contrary to centralized regulations. But the possibility of regulations should not be ruled out. In any case for now speculators seem to have found an interesting oasis in the price game of cryptocurrencies, and especially bitcoin.