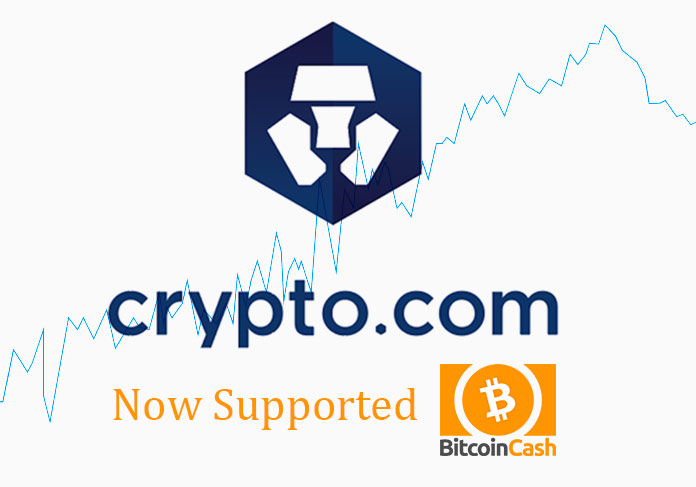 Crypto.com, the Hong Kong-based payments and cryptocurrency platform has enabled support for Bitcoin Cash according to an announcement made by the company on Wednesday, May 29th.

This means that now, users of Bitcoin’s younger sibling Bitcoin Cash will be able to spend their coins in up to 40 million merchants worldwide, bringing convenience and utility to the often forgotten Bitcoin Cash variant of Bitcoin.

Bitcoin Cash becomes the 21st coin to be added to the platform joining it counterparts including bitcoin (BTC), ether (ETH), Litecoin (LTC) and Ripple’s XRP, stablecoins including TrueUSD (TUSD), and PAXOS (PAX) and Crypto.com’s own MCO and CRO tokens.

Crypto.com offers both an online platform to manage your funds as well as a payments card dubbed MCO Visa card that allows for converting cryptocurrencies into fiat currencies in order to spend them at any merchant supporting Visa cards globally.

In addition, users will be able to purchase Bitcoin Cash (or load Bitcoin Cash on to their accounts) through credit card purchases or direct bank deposits as supported by Crypo.com partners. Kris Marszalek, Co-Founder, and CEO of Crypto.com said:

“We’re committed to providing a complete selection of all major digital assets and empowering our customers to purchase it at true cost without fees or markups.”

Bitcoin Cash is a variant of Bitcoin (also called Bitcoin Core – the original blockchain that specked the cryptocurrency revolution) having forked from the main blockchain back in 2017.

Crypto.com, formerly known as Monaco, was founded back in 2016. It offers both a cryptocurrency wallet with support of the Visa debit card that is connected to the wallet. The company has been developing its products for several months and was finally ready to ship its first batch of MCO Visa cards back in October 2018.

It first shipped to its Singapore users and has since expanded support to its US-based customers after gaining strategic partnerships with Florida-based affiliate Foris Inc. and Metropolitan Commercial Bank, New York. Its cards are purportedly fee-less, so no annual, monthly maintenance fees or even ATM-withdrawal fees.