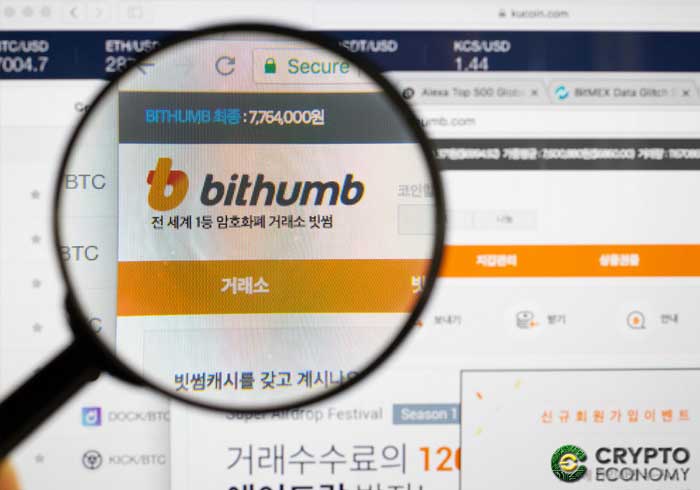 The Bitcoin [BTC] price yesterday hit new yearly lows amidst a protracted cryptocurrency bear market. Over the past month, the leading cryptocurrency has lost close to half of its value mainly due to uncertainty in the just concluded hash war between two factions within the Bitcoin Cash community.

For the better part of this year, it has lost a whopping 83%, a loss from its all-time high late last year. However, despite the different market pressures influencing the bitcoin price, recent research by cryptocurrency market data analytics company CryptoCompare has shown that ‘artificial’ factors could have played a part in yesterday’s sell-off. The report suggests that South Korean cryptocurrency exchange Bithumb may have played a critical role, albeit indirectly, to influence the price action.

Data from CryptoCompare’s latest CCCACG (CryptoCompare’s Aggregate Pricing Index) shows that Bithumb has been leading in crypto assets trading volumes in the past two months of October and November 2018. In those two months, the Bitcoin trade volumes recorded daily averaged $1.24 billion. These figures represent a close to 300% month over month increase in terms of trade volume despite the reducing figures in competing exchanges including Binance whose trade volume was dropping 34% every month.

CryptoCompare’s data reveals that Bithumb’s trade volume was not entirely organic. Several other data aggregators including industry leader Coinmarketcap avoided listing Bithumb as the leading cryptocurrency exchange by trading volume and instead listed Binance. This is because most of the trading activities within Bithumb were as a result of the trading promotional activities that correspond to this period.

The report details that “Bithumb saw a 284% increase in volumes from the previous average of 323 million USD for the Sept/Oct period. This increase in volumes follows after Singapore-based BK Global Consortium bought a controlling share in the exchange in recent months, and later implemented a series of airdrop competitions, raffles, rebates, and other programs designed to incentivize non-Korean users to sign up to the exchange and trade in exchange for rewards.”

Several other lesser ranking cryptocurrency exchange may have participated in similar activities which helped the Bitcoin price remain relatively stable during the month of October despite several technical and fundamental indicators showing signs of BTC weakness.

On the 14th of November, one of the promotions on Bithumb came to an end which propelled the price of Bitcoin to fall. The number of promotional activities has since dropped leaving Bitcoin price to be organically controlled by market dynamics which has seen its price continue plummeting as it seeks the bottom.

One industry insider, Mati Greenspan, senior market analyst at eToro said this about the report: “If these findings are indeed accurate, I would say that blaming South Korea for the drop wouldn’t exactly be correct. More likely, it appears that the volume promotion by Bithumb caused several months of stabilization in prices, to begin with.”