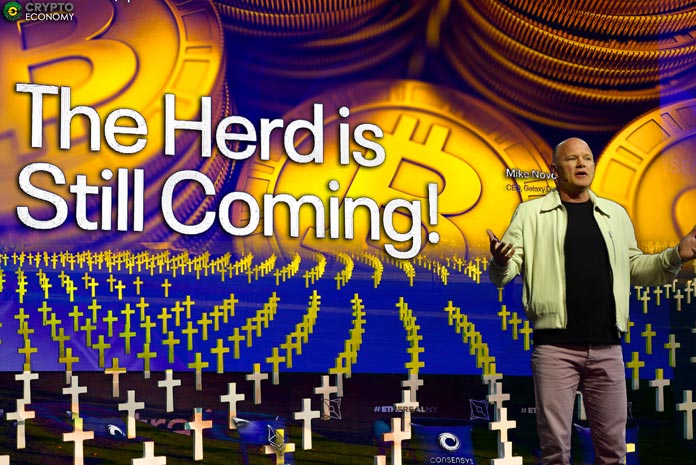 “Bitcoin is kind of finished.” Those were the words of Bitcoin bull, former Wall Street exec, founder and CEO of Galaxy Digital, Michael Novogratz, speaking on stage at the Ethereal Summit in New York on Friday, May 11th. His speech was titled “The Herd Is Still Coming!” probably as a reference to the mainstream adoption of blockchain. Novogratz’s speech was filled with bitter truths and comforts for his audience with the punch line being that Bitcoin has already achieved its most important use case – being a store of value.

If you really think bitcoin is gonna win this store of value, everything else needs to be used for something

Bitcoin is not going to change the world. It’s done. So who is? Well according to Mike, the revolution that Bitcoin sparked, the Web 3.0 decentralized internet is. As far as the future of Bitcoin is concerned, the best that Bitcoin is going to be is “digital gold.” He made parallels to the periodic table saying

There are 114 elements on the periodic table. Only one, gold, just gets a store of value. You don’t need to do a lot more to it to fulfill its use case; it’s not the technology. We could take the bitcoin code and reconstruct it tonight, we call it Novocoin and it’ll be worth bupkis.

According to Mike, there are two more use cases that blockchain could be applied to that will define the coming revolution. The first is mobile payments, something that Bitcoin was initially designed for but whose demerits have led to other coins surpassing it. The other is Web 3.0, the one that will better fit the “saving the world” mantra. In terms of the payments front, the frontrunner is still yet to be known now that Bitcoin has become excruciatingly slow and expensive in comparison to other more modern blockchains. Both Telegram and Facebook are working to release their versions of stablecoins to be used as means of payments amongst their users but that is yet to be seen.

The last use case highlighted by Mike was the Web 3.0 revolution. So far led by Ethereum, the leading altcoin by market cap, the new revolution is mostly underpinned by decentralization. Now Ethereum may be the frontrunner so far, Mike noted that the network faces stiff competition from other projects including Cosmos, Dfinity and PolkaDot. The winner of the race for the Web 3.0 torch-bearer may not be known for another five years.

Mike has recently made another one of his several predictions about the future price of Bitcoin this time saying that one Bitcoin will be worth more than $20,000 within the next 18 months.

0
AVA Labs announced a new partnership with Chainlink that results in the integration of their real-time price data. The new integration is focused on...
Read more
Bitcoin Cash News

0
Close to $1.4 billion has been stolen by cryptocurrency criminals since the beginning of the year 2020 according to a report from crypto intelligence...
Read more
Companies

0
Leading manufacturer of bitcoin mining equipment Bitmain has launched the latest iteration of its T series miners the T19 model which will be a...
Read more
CryptoCurrency News

0
Kraken added support for USDT on Ethereum Blockchain. Users can now deposit and withdraw USDT-ERC20 token in the exchange platform. “Kraken will support #Tether...
Read more
We use cookies to ensure that we give you the best experience on our website. If you continue to use this site we will assume that you are happy with it.OkPrivacy policy