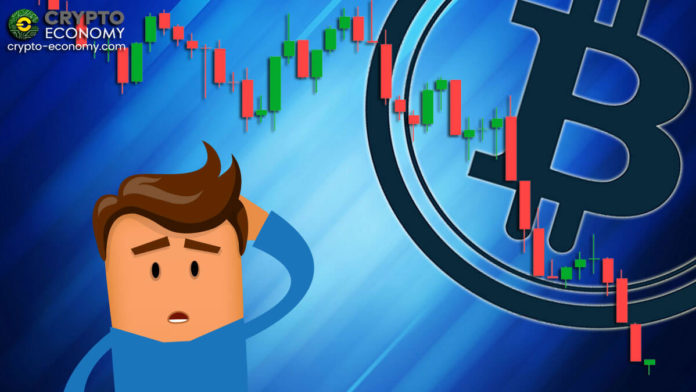 Flagship cryptocurrency Bitcoin has lost more than 8% in the last 24 hours following a sharp decline at midday UTC on Wednesday. The price of Bitcoin fell from an opening level of $7,962 according to data from Luxemburg-based cryptocurrency exchange Bitstamp to close 6.8% low at $7,427.

The price slid further in the minutes that followed to reach an intraday low as well as a 4-month low of $7,293 representing an 8.4% decline in less than a day. The Wednesday fall saw the price of bitcoin break a range in which Bitcoin has been trading over the last 4 weeks between $7,800 and $8,400. Bitcoin has recovered slightly to trade at $7,430 at press time.

The rest of the cryptocurrency market did not fare any better than bitcoin with most of the altcoins on the Coinmarketcap list posting percentage drops between 5 and 10% with some going even further down.

Ethereum, the leading altcoin is down about 4% while runner-up Ripple’s XRP is down about 6%. Only Chainlink and stablecoin Tether are in the green at the moment which shows the high correlation between the overall market and the price of bitcoin whose price the rest of the assets seem to follow.

It is notable that the bitcoin price nosedive came around the start of the hearing of the launch of the Libra cryptocurrency that was taking place in Congress. Facebook founder and CEO Mark Zuckerberg were testifying before the House Financial Services Committee on his company’s plans to contribute to the development and launch of the Libra stablecoin. Ever since, the announcement by Facebook in June, the project Libra has become a favorite punching bag by regulators and lawmakers across the world.

Chairlady of the committee, Rep. Maxine Waters has called on Facebook to agree to a moratorium on the project as the lawmakers fight to understand the implications of the launch of such a project. She repeated the same during the Wednesday hearing.

At the launch of the Libra whitepaper in June this year, the project cased quite a bit of media coverage precipitating the rise of the price of Bitcoin to new yearly highs towards the end of June. However, as more lawmakers have chosen to add their critical voices towards the development of the project, the price of bitcoin has been depressed further down to May levels.