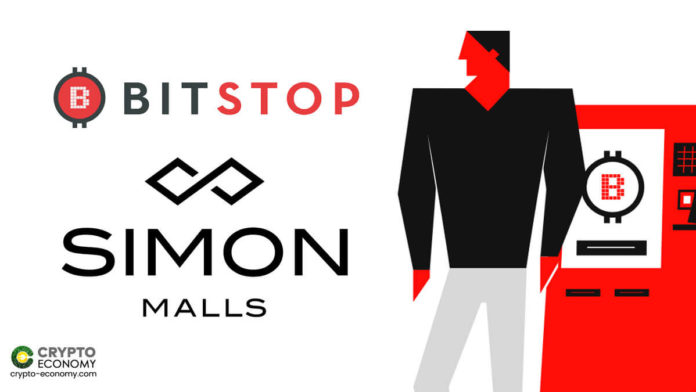 According to a press release published by Global Newswire on November 26, Miami-based Bitcoin Automated Teller Machine (ATM) company Bitstop has partnered with a famous shopping mall operator in the US, Simon Malls, to install Bitcoin ATMs to facilitate shopping with Bitcoin on the malls locations.

The firm, in the press release, announced that it had already installed Bitcoin ATMs at five locations which includes California-based Carlsbad Premium Outlets in Carlsbad, Florida-based Miami International Mall, Sawgrass Mills in Sunrise, The Avenues in Jacksonville, and Mall of Georgia in Buford, Georgia.

Andrew Barnard, Bitstop co-founder and CEO, said that machines were installed to facilitate shopping for upcoming Black Friday and Christmas holidays and this could be perfect gift for people on these events. He stated:

“With the strategic timing of this new installation of Bitcoin ATMs at Simon Mall locations, customers can conveniently buy Bitcoin while doing their Black Friday and Christmas holiday shopping. Bitcoin is the perfect gift for family and friends this holiday season. Our Bitstop Bitcoin ATM mall locations are at the forefront of a trend as Bitcoin and digital currencies become part of the mainstream culture.”

The firm further said this another series of Bitcoin ATM installation across the country after the recent installation at the Miami International Airport back in October. According to Barnard, the company has now over 130 convenient Bitstop Bitcoin ATM locations across the country and the number is growing every month. Bitstop, which claims to be licensed and regulated, showed it’s intentions to grow its teller machine network by over 500 locations by the end of 2020.

Bitstop, based in Miami, Florida, was founded in June of 2013 with a mission to make bitcoin accessible to all.

Bitcoin ATM industry is seeing significant growth as according to an estimate, an average of 11 machine is being installed daily. According to the statistics provided by Coin ATM radar, currently 6,004 machines installed worldwide, over 65% of which are in the United States. The data shows that only in November of this year, 186 machine have been installed so far till Wednesday, November 27.

According to Coin ATM Radar, among these 6004 Bitcoin ATM locations, over three-quarters of the machines installed worldwide are in North America, nearly 20% in Europe and only 2% in Asia. The US is the top with 3,924 ATM locations, Canada has 653, while the next countries in the top-four are the United Kingdom and Austria with 272 and 189, respectively.