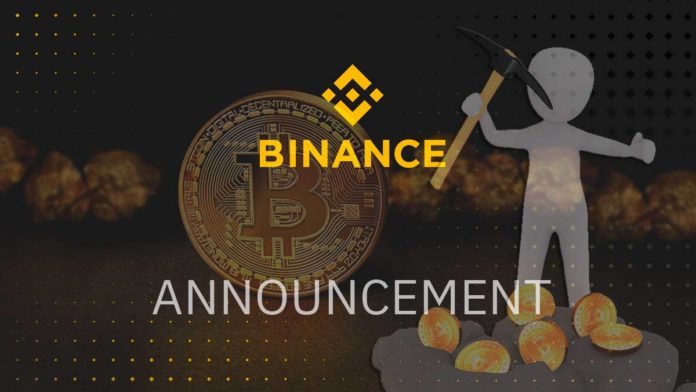 Cryptocurrency exchange Binance has officially launched the highly anticipated mining pool whose rumors have been circulating for the past two weeks. The exchange announced the launch on Monday calling the service Binance Pool.

According to the announcement, Binance Pool will support two types of blockchains i.e., Proof of Work chains such as Bitcoin and the current state of Ethereum as well as Proof of Stake. The latter is gaining populism with a growing number of blockchain projects with Ethereum planning to migrate toward it soon.

Binance Pool launches with a special promotion for its early adopters with an offer of zero-fees in the first month of mining. The offer lasts through May 31st with the possibility of extension for large scale miners upon request with the pool operator.

As many as 15 employees from Binance are now working full-time on the pool which complements the already growing list of Binance services including the spot/margin trading, staking, lending, savings, and Futures. Despite the gradual growth of the exchange, it is slowly occupying a large market share as it expands to every area of the cryptocurrency industry.

Binance launches the Pool with initial support for Bitcoin mining, however, more blockchains will be added with time according to the announcement. On Friday, April 24th, Binance CEO Changpeng Zhao tweeted that the Binance Pool had successfully mined the first block.

As of launch time, The Binance Pool ranks in the 11th position according to the amount of hashing rate contributed towards the Bitcoin network. It currently contributes 2039.09 PH/s placing it just behind BTC.TOP.

According to the rankings reported by BTC.com, there are two other exchanges already running mining pools and are ranking ahead of Binance in terms of hashing rate.

OKEXPool is the leading ranking at 6th position while Huobi Pool comes second ranking at position 9 with 7050.00 PH/s and 5095.25 PH/s of hash-rate respectively.

Binance claims that its latest move to join the Bitcoin network is aimed at increasing decentralization of the network, however, some in the industry have expressed their skepticism and caution on the move.

Their qualms being that Binance can dominate the market and attract more miners to the pool, therefore, beating their argument for decentralization.

If history is any indication, Binance will be able to attract more miners to the platform which will increase their mining hash rate and making the landscape more centralized.

0
After a healthy uptrend, the Bitcoin hash rate recorded a new ATH surpassing the 200 Ehash/s and currently sitting at 196 Ehash/s. The new...
Read more
CryptoNews