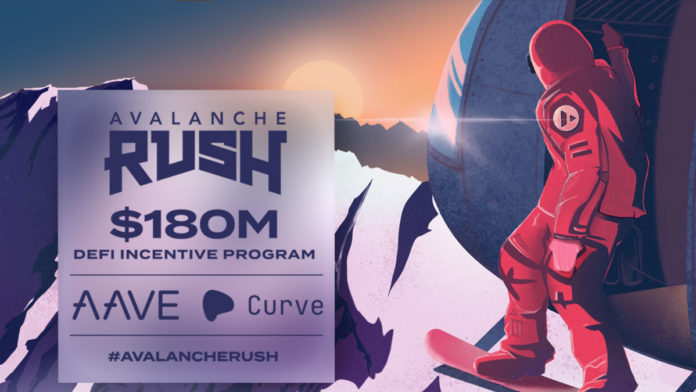 Liquidity mining incentive programs are among the top solutions to find new users for every blockchain. Blockchains run these programs by rewarding their native tokens to liquidity miners and encourage them to lock their assets in the new network.

Avalanche will run a program named Avalanche Rush, aiming at introducing new applications on the blockchain. Aave and Curve are among the top DeFi platforms regarding TVL. Avalanche wants to bring them to its ecosystem and will run an incentive program to attract liquidity miners.

Aave and Curve users will receive AVAX, Avalanche native token, for a period of three months.

Avalanche Rush is a $180M incentive program. But initially, $20M AVAX will be rewarded for Aave users, and $7M AVAX is planned for Curve users that lock their assets in the Avalanche version of these platforms.

It’s not the first time that Avalanche Foundation runs an incentive program for attracting users. The foundation has run a $3M liquidity mining initiative with a native platform named BENQi recently. Besides, a partnership is signed with Stake DAO to build innovative yield generating strategies for new users from Aave and Curve.

Avalanche Bridge is a new service in this blockchain that brings cross-chain bridging technology. The combination of this service with the Avalanche Rush program can surely result in more users migrating their assets to this blockchain.

Major DeFi platforms like Aave and Curve chose Etthereum initially to launch their services. But due to various challenges in this blockchain, like network congestion, they’re looking for alternatives. It’s the reason that Avalanche tries to run incentive programs to attract the users of these platforms. Michael Egorov, Chief Executive Officer at Curve Finance, said:

“As DeFi becomes more and more popular, it becomes clear that Ethereum blockchain is currently struggling to fit all the activity. Thus, it is important to expand to other chains and L2s. We find Avalanche offering an excellent opportunity with its unique decentralized consensus mechanism, high throughput, and low transaction fees.”

Adding new DeFi platforms helps Avalanche serve its customers better. Aave and Curve bring high-speed, low-cost, and more diverse DeFi offerings to this blockchain. We can say the new incentive surely helps all of these platforms to grow faster.

RUNE, CELO, and AAVE Lead the Rise in the Market With More Than 14% in the Last 24 Hours