Home CryptoNews Aragón in Spain will be the first autonomous community to apply blockchain...
CryptoNewsTechnology

The Spanish autonomous community of Aragon situated to the North-eastern part of Spain becomes the first community in the country to adopt blockchain at the state level. In this case, the state has signed a contract with Alastria – a blockchain consortium with diverse independent entities in its ecosystem – to develop applications that Aragon will use for public administration.

Alastria is already working with more than 274 entities which include public companies, public administration departments, and educational institutions which have been working on developing blockchain-based tools in accordance with Spanish and EU legal frameworks.

Spain is divided into 17 autonomous communities (states) according to its 1978 constitution to enable greater autonomy and regional independence. Aragon is one of the states in Spain. Neighboring to Aragon is the state of Catalonia, which has announced similar plans to integrate blockchain in public administration activities by December 2018.

The contract was signed by the Counsellor of Finance and Public Administration of the Government of Aragon, Fernando Gimeno marking a great achievement and paving the way for other Spanish states to emulate. Gimeno described the contract as “transformative” not just for the Aragon state but for the global community and added that the world will “realize suddenly and strongly” the power of blockchain technology in the near future. 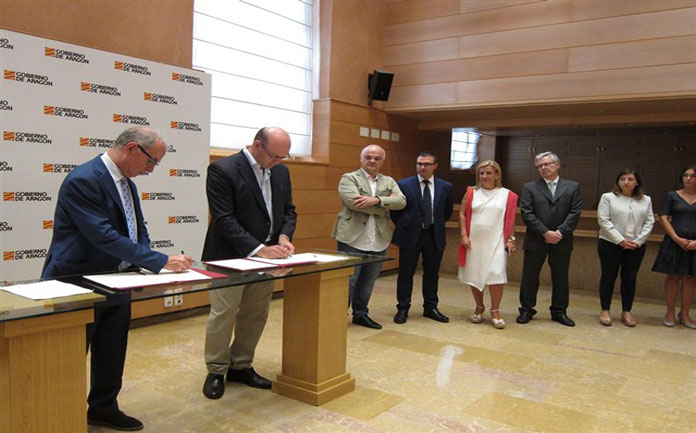 Gimeno also strongly believes that blockchain represents the future of technology which will play a great role in public administration. In his press briefing after the signing, the Aragonese Counsellor described how blockchain would be instrumental in improving public administration duties including improving transparency in executing government processes which will, in turn, lead to more efficient administration. This kind of environment, he believes will attract more business investments to the state and within the state.

To this end, the Counsellor said that the employees of the regional government are currently being trained to work with the technology to ensure seamless integration and maximum utilization when the adoption phase begins. The signing of the contract signals the start of a series of activities scheduled by the Aragonese government to take place through the end of the year including training sessions and consultancy sessions to identify more use cases for blockchain within the government.

Spain is, however, not the only country that has seen the “enormous potential” of the blockchain technology. Countries such as Switzerland and several others across the world are exploring ways to tap into the distributed ledger technology and help take the technology mainstream.