Customers that have any additional questions regarding SegWit or bech32, can always start a live chat on https://anycoindirect.eu Just press the green “Help” button in the bottom-right-corner to start a live chat with one of their agents. Anycoin Direct is always focused on helping customers. Whether people need help selecting the right wallet or if they have a cryptocurrency question in general, the agents of Anycoin Direct are live any day of the week.

SegWit itself is a huge technical improvement that tackles Bitcoin’s ‘block size issues’, by moving the transaction’s signature outside the block. This results in more efficient use of the 1mb block size. Therefore, the blockchain can process much more transactions per second. When purchasing bitcoins, customers of Anycoin Direct can now enter a bech32 address. These bech32 addresses start with “bc1”. In the example below, you can see all the different Bitcoin addresses that Anycoin Direct accepts: 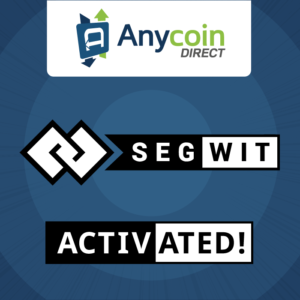 Legacy addresses are the standard, most common, addresses that start with a “1”. Most users still use the Legacy blockchain.

The Pay-to-Script-Hash address is compatible with SegWit, but does not benefit from all the perks that SegWit has to offer. These P2SH addresses always start with a “3” and can be used, just like the old Legacy addresses.

The new bech32 format is the most advanced Bitcoin address. Most exchanges and brokers have not implemented bech32. Bitcoin core wallet, Electrum and Anycoin Direct have implemented bech32 and therefore benefit from lower transaction fees then P2SH addresses.

The latest bitcoin core wallet (V0.16.0) also supports this bech32 format which has some technical benefits over the already used SegWit address format: