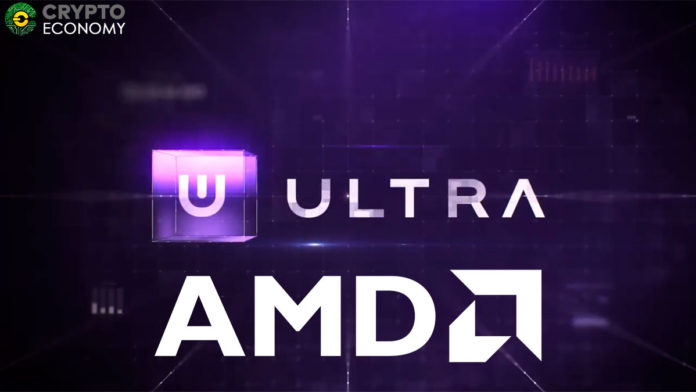 On 13th Dec 2019, Ultra announced that it had entered a partnership with GPU giant AMD. According to the announcement, the new partnership was part of the ongoing mission to make the games industry democratic for both players and distributors.

The two companies aim to promote the use of the Ultra platform and to emphasize on the importance of blockchain-based game technologies.

Thoughts on the Partnership from Both Sides

The news of then new alliance seemed to arouse excitement from both sides of the partnership. Joerg Roskowetz, who is the Head of Blockchain Technology at AMD said that the two companies would work together to bring to reality the next-generation community-centric games. Through the partnership, the two companies would be able to transform the purchase, sharing and experience of online games.

The Co-CEO of Ultra, Nicholas Gilot added that Ultra was pleased to be working with AMD. He also mentioned that AMD had recognized early on the important role that Blockchain technology played in the gaming industry.

The two companies have a shared commitment in the new partnership; to provide users with a robust game experience. The two tech-giants will cooperate on the marketing strategies to promote the use gaming technologies that are based on the blockchain technology.

Customers will receive game distributions from AMD. The games will vary in genre, and will have some of the games exclusive to the Ultra platform.

AMD and Ultra will also work together to provide optimal cryptographic computing experience for AMD users. The partnership will also see the two companies venturing into future collaborative projects.

Following the announcement, it seems Ultra will be joining Robot Cache on the ‘Featured Games’ page of AMD. Robot Cache is yet another game that is based on the Blockchain technology.

The partnership will see the Ultra platform built as an alternative to platforms such as Stream that are centralized with a mentality that focuses on the developer first. The new platform seeks to raise twice as much profits for game developers while maintaining a simplified gaming experience for gamers on the platform.

The news of the alliance came just weeks after Ultra announced its partnership with Ubisoft, which is a French gaming platform famous for Assassin’s Creed and far Cry.