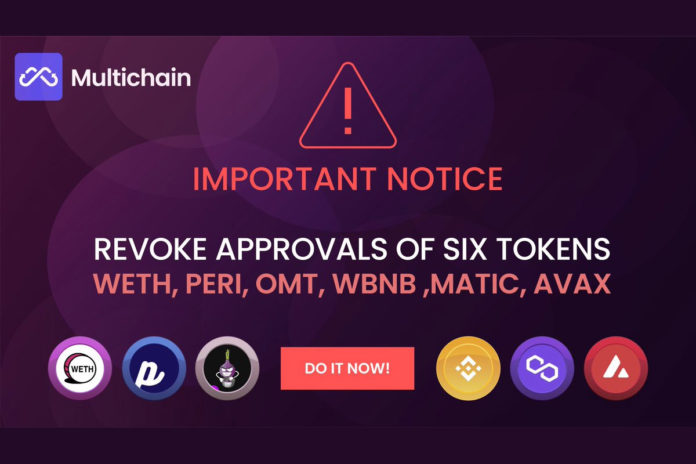 The recent news about the MultiChain hack is spreading around the internet and may have awful effects on the brand and its platform. The news came after some hackers stole more than $1.6 million funds from the platform, but it’s getting worse, and the number is rising.

The whole situation doesn’t look good for MultiChain, and many users are complaining about the bad support from the team. They need the money, and the hackers don’t seem to stop taking advantage of the vulnerability. Lorenzo Franceschi-Bicchierai tweetd about the situation saying:

“The hack against Multichain users keeps getting worse. Hackers have now stolen $3 million and counting, and victims complain that the company is not giving them enough support in a chaotic Telegram channel.”

It seems one of the hackers offered to return 80% of the funds. They want to keep the rest as “tips for saving your money,” according to a message sent to users. In a note attached to a transaction that was posted on the Ethereum blockchain on Wednesday, this hacker, who identified themselves as a “white hat,” stated their commitment to the community.

How was the hacking?

The breach started on Monday, when Multichain, a platform that allowed users to swap tokens between blockchains and was formerly known as Anyswap, disclosed in a Medium article that there was a vulnerability that affected six cross-chain tokens, which was the beginning of the attack.

Users must set permissions for the platform’s contract in their cryptocurrency wallets before they can swap tokens using Multichain, and it is these approvals that the hackers took use of in their attack. According to security specialists who are tracking the hack, there are at least two hackers involved in the attack.

As mentioned above, MultiChain is warning users of actions to prevent further breaches. A tweet from the platform says:

“Again, a reminder to the users who have ever approved the contracts of $WETH $PERI $OMT $WBNB $MATIC $AVAX on #Multichain, please log in to https://app.multichain.org/#/approvals to remove the approvals as instructed here.”

Regardless of the next incidents of this hack and the possible return of funds to users, the recent challenge for MultiChain can have severe effects on this platform. Users may not use it anymore because of worry about losing their funds again. But it again shows the importance of security actions for keeping funds safe in the cryptocurrency platforms. After all, we should wait and see if MultiChain can regain its reputation after the big hack.

0
The FBI and the Center for Internet Security (CISA) have released a new study alleging North Korean hackers of attacking the US crypto business....
Read more
CryptoNews

0
It was reported on Twitter by the Bored Ape Yacht Club that their Discord server had been hacked. Fortunately, the team was able to...
Read more
CryptoNews

Arthur Cheong, Founder of DeFiance Capital, Loses Over $1 Million in a Hack

0
Arthur Cheong, one of the most famous NFT and DeFi investors and the founder of DeFiance Capital, announced being hacked. He tweeted about the...
Read more
CryptoNews

0
It has been a big year for DeFi. Owinng to the increased interest in the space, decentralized finance saw a significant acceptance. Malicious entities saw...
Read more
- Advertisment -
Posting....