After Barclays, Spanish Santander Bank to End Relationship with Coinbase 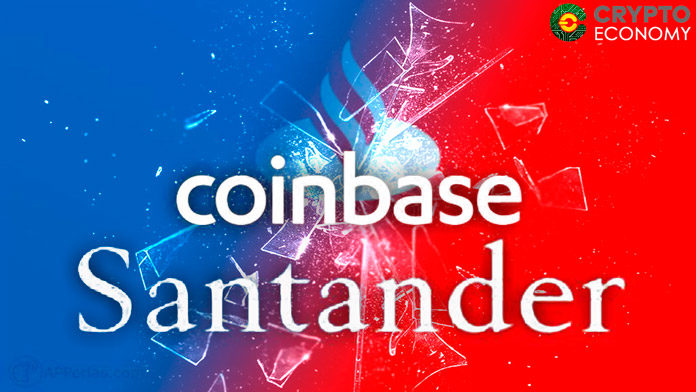 Santander UK has also cut ties with a popular San Francisco-based crypto exchange Coinbase after Britain’s Barclays announced a similar decision but still there is no official statement by Santander on the matter. It is all happening for Coinbase. Santander is a Spanish bank who was providing services to UK customer through Coinbase. There are rumors that the decision was made in light of increased illicit activities associated with the exchange.

Just got off the phone with a Santander representative in the U.K. who informed me they will no longer be allowing their customers to deposit money to Coinbase.

After I put in a complaint their complaints department confirmed to me that I should move to an alternative bank if I wish to make the payment.

They went on to say this is likely because of an increase in fraud related to Coinbase.

This step looks temporary until Coinbase improves their fraud prevention as the person posting this thread mentioned that it is isolation from Coinbase, not from cryptocurrency in general.

This news was a surprise for many cryptos investors. Santander is the first bank to use Bitcoin and Blockchain technology to transfer live cross-border payments. It has taken an extraordinary interest in the adoption, implementation, and success of digital currencies.

The crypto markets woke up Wednesday to the news that Coinbase’s banking relationship was under threat in its largest market in Europe. Yesterday, Britain’s Barclays bank ended its relationship with Coinbase but the main reason for the split remains unclear. Speculation pointed out that the bank got uncomfortable with the exchange’s push to add more crypto on its platform for trading. There was news that Coinbase found a replacement UK banking partner in form of ClearBank.

Global banking giants have been reluctant to do business with crypto-related startups due to the concerns of money laundering, the rising number of cyberattacks, and fraudulent schemes in crypto space and banks have to face regulatory authorities if there happens an event like this. The UK government has also taken a strong stance against the use of cryptocurrencies, fearing they could be used to facilitate illicit activities.

After these two splits, Britons may become unable to send cross border payments and withdraw their money back to their bank account easily.