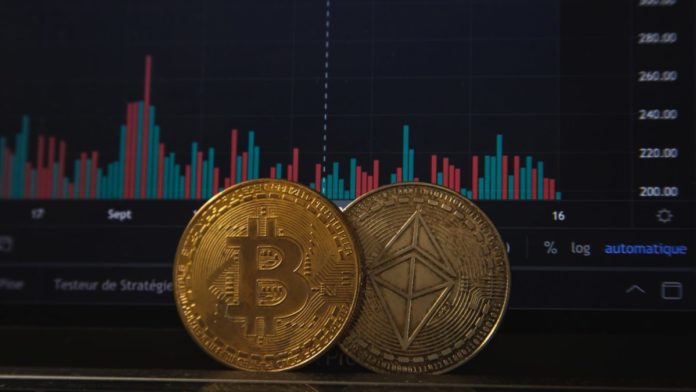 Bitcoin (BTC) and Ethereum (ETH), the two largest cryptocurrencies by market cap and exchange volume, have witnessed astronomical growth since inception. However, due to macroeconomic factors including rising inflation and consecutive Fed rate hikes the digital tokens have witnessed a major meltdown. Despite slumping prices, Bitcoin and Ethereum could benefit from rising inflation and weak macroeconomic conditions due to their scarcity. Let us understand in details.

Bitcoin (BTC), known as digital gold has ranged in value from less than $20,000 to more than $60,000 in a span of one year. On the other hand, Ethereum which was created as a platform to facilitate immutable, programmatic contracts traded between $4,000 to $1,000.

Both the cryptocurrencies have observed a formidable share of market volatility. Although BTC and ETH have tanked in valuation over the past few months, crypto enthusiasts and several investors are still banking on these digital assets to hit new highs.

Bitcoin and Ethereum Will Increase in Value in the Future

Legendary investor, Paul Tudor Jones, offered a ray of hope saying that scarce digital assets will have value in the future. He suggested high inflation rates to be a potential catalyst for a crypto surge. Arguing that cryptos such as Bitcoin (BTC) and Ethereum (ETH) could benefit from rising inflation due to their scarcity, the investor added,

“In a time when there’s too much money, which is why we have inflation, and too much fiscal spending, something like crypto—specifically Bitcoin and Ethereum—where there’s a finite amount of that, that will have value at some point.”

Jones also commented on the Federal Reserve’s economic tightening policy, which has seen the U.S. central bank hike interest rates by 75 basis points on three occasions this year. The Fed has forecast a sixth round of rate hikes by the end of the year. Jones argued that a pivot in the Fed’s hawkish stance could lead to a surge across global markets. Every time the Fed raises rates, it gets harder for people holding debt like mortgages to make repayments.

Jones explained that if rates go up too high or stay high for too long, it will eventually result in mortgage holders defaulting on their loans, resulting in a turmoil in the housing market similar to the Great Financial Crisis of 2008. Therefore, the Fed will need to pivot away from its monetary tightening policy before relieving much of the downward pressure keeping risk assets like cryptocurrencies suppressed. Jones added,

“When a pivot happens you’ll probably have a massive rally in a variety of beaten-down inflation trades, including crypto.”

Crypto Will Rise once People Lose Trust in Central Banks

Recently, another prominent investor, Stanley Druckenmiller, chimed in the tune of Jones suggesting that cryptocurrencies could eventually recover despite the gloomy macroeconomic parameters. Druckenmiller said that crypto could make a comeback as citizens begin to distrust their central banks.

The billionaire hudge fund manager sees a long-term growth for cryptos if central banks start to reverse its tightening policies. In an interview, Druckenmiller expressed,

“I could see cryptocurrency having a big role in a Renaissance because people just aren’t going to trust the central banks.”

Jones and Druckenmiller’s bullish crypto thesis effectively stems from the idea that Bitcoin can act as a hedge against inflation. Jones specified that Bitcoin and Ethereum are the most potential benefactors of fiat currency erosion, highlighting their scarce properties.

In a statement, Kasper Vandeloock, CEO at quantitative crypto trading firm Musca Capital, said BTC is still among the strongest performing asset despite the downturn. He further expounded,

“Sure, it is down 75%; however, that is compared to the strongest asset out there if we compare it to currencies such as the Turkish lira, it shows more strength. Besides, it is not like other hedges such as gold that have never encountered a large drawdown. One factor many people forget about is that an inflation hedge is a kind of ‘insurance’ thing such as real estate, while gold is hard to store and sell since it’s illiquid. Bitcoin offers many advantages that those assets don’t.”

Another potential event that could benefit digital assets is “fintech crypto adoption”. Experts believe a there is huge gap in the market that is causing cryptos to slow down. Experts belive if fintech companies start to integrate crypto transfers into their offerings and make it easier for users to put their funds to work on the blockchain, cryptocurrencies could see a phase of mass adoption.

While cryptocurrencies have become more popular due to the rise of decentralized finance (DeFi), its adoption level indicates that most non-crypto users avoid participating due to a lack of knowledge regarding the technology. Hence, crypto education is a necessary tool to make the general public feel more comfortable using cryptocurrencies, whether transacting or investing in it or starting their crypto-related businesses and start-ups.

The FinTech industry’s growth directly correlates with how advanced the general population is in understanding the benefits and limitations of crypto. Meanwhile, crypto education will also raise awareness regarding crypto scams. It is of tremendous value to spread crypto literacy so newcomers and even less experienced users or institutions can fight the stream of scammers and shady crypto platforms.