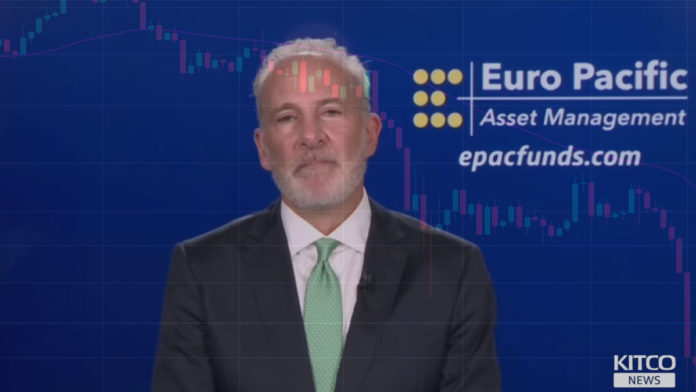 According to Peter Schiff, chief market strategist of Euro Pacific Asset Management, it is unlikely that Bitcoin will ever reach new highs above $69,000 again, and in fact, he expects it will continue falling to $10,000 and below within the next year.

Schiff has described the rally in the crypto markets, including Ethereum’s 70% gains since early July, as a sucker’s rally and told David Lin, Anchor for Kitco News, that the rally is not sustainable.

The Whole Market is in Danger

In his interview, he predicted that there would be a market crash in the near future. In Peter’s opinion, people should make use of the rally they have right now to get out and take advantage of the market.

“It is important to note that there are still quite a few people who have profits in these tokens. It was four, five, and six years ago that people purchased Bitcoin, and now they have accumulated big profits. The same thing can be said about Ethereum. Otherwise, those profits are going to be taken from you by the market because people should get out before it takes them.“

At the end of the day, Schiff believes that this crypto bubble is going to have no lasting impact on anyone other than the people who sold their crypto assets before the bubble popped.

In his words, Schiff believes that this year’s selloff in crypto markets reflects a massive pump and dump phenomenon on the market.

“You had celebrities, whether it was athletes or entertainers, signing on to promote this coin or that coin out there to their Instagram followers or whatever they were doing. It was a massive pump, but people are overlooking the dump.”

As part of Schiff’s claims, MicroStrategy’s stock is also overvalued. As a result, he believes it’s ridiculous that Michael Saylor, the CEO of MicroStrategy, hasn’t changed his position in regards to whether this investment is a success or not.

Schiff stated that making money from our first purchase is like being able to cherry-pick your first purchase, but what about the other purchases that were much higher up on the list? In order to do that, you have to look at the totality of your purchases and add up all of them.