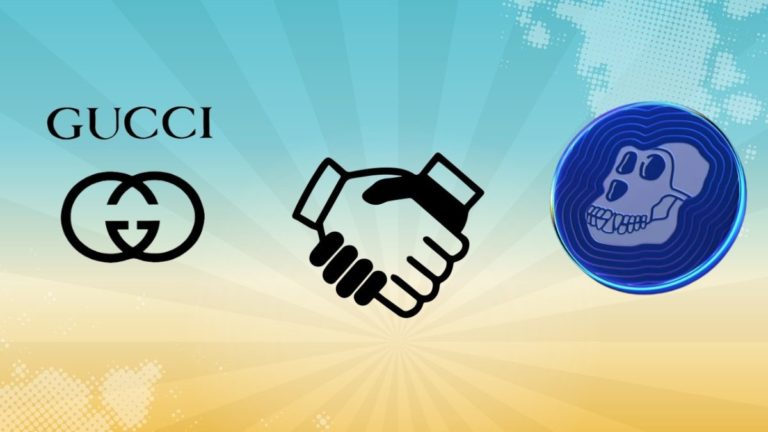 Italian luxury fashion brand, Gucci, has just announced that it will accept Bored Ape Yacht Club-affiliated, ApeCoin (APE), at select U.S. stores. With this move, the fashion giant has become the first major brand to accept payments in APE.

In an effort to ramp up its Web 3.0 presence, Gucci, has continuously made innovations in the crypto space. Recently, the iconic fashion house entered the metaverse by buying a plot of digital land in, The Sandbox. In March 2022, Gucci had also announced a partnership with popular NFT project, 10KTF, to launch its own non-fungible token (NFT) collection. In February, Kering president and CEO, Francois-Henri Pinault, revealed that Kering, parent company of Gucci, had created a team fully dedicated to Web 3.0 and the metaverse.

Now accepting @ApeCoin payments via @BitPay, select Gucci boutiques in the USA expand the range ofcryptocurrencies available for in-store purchases, yet another step in the House's exploration of Web3.

On August 2, Gucci announced that going forward, customers will be able to able to purchase in-store merchandise with ApeCoin through the payment service provider, BitPay. This is not the first time, Gucci, has experimented with digital tokens. Earlier this year, some Gucci stores in the U.S. started taking cryptocurrencies, including Bitcoin, Ethereum, and Dogecoin, as well as five dollar-pegged stablecoins.

To discover more about this collection, visit https://t.co/HVf3V5gIxV and get your very own NFT profile picture with Gucci drip.” pic.twitter.com/AweuzFypoi

Bored Ape Yatch Club (BAYC) collectors seem to have shown strong support for Gucci’s cryptocurrency initiatives so far, with Twitter user NBA Top Shot East Coast Podcast claiming to be the first person to pay for Gucci items in ETH at the official store in Wooster, New York, in mid-July. While two other BAYC members claimed to be the second and third person to do so.

ApeCoin (APE) also took to Twitter to publicize the event. The APE token was launched earlier this year registering an explosive rally amidst a wider market rout. On March 18, the Ethereum-based token managed to score a massive 1400% rally. The primary objective of APE was to incentivize and empower an entire decentralized community building at the forefront of Web3.

Excited to announce that @Gucci will become the first major brand to allow customers to pay for purchases in-store with ApeCoin, via @BitPay. 🎉🎉🎉 https://t.co/ipoeW6lXLl

It was released by the newly formed Apecoin DAO. Despite ApeCoin’s association with Bored Ape Yacht Club (BAYC), it has been set up independently of its developer – Yuga Labs. ApeCoin social media account had stated,

“ApeCoin is owned and operated by the ApeCoin DAO, a decentralized organization where each token holder gets to vote on governance and use of the Ecosystem Fund. Holding ApeCoin is the only requirement for membership in the ApeCoin DAO. The DAO is supported by Ape Foundation, which was created to act as the legal steward of ApeCoin and administer the decisions made by the ApeCoin DAO community.”