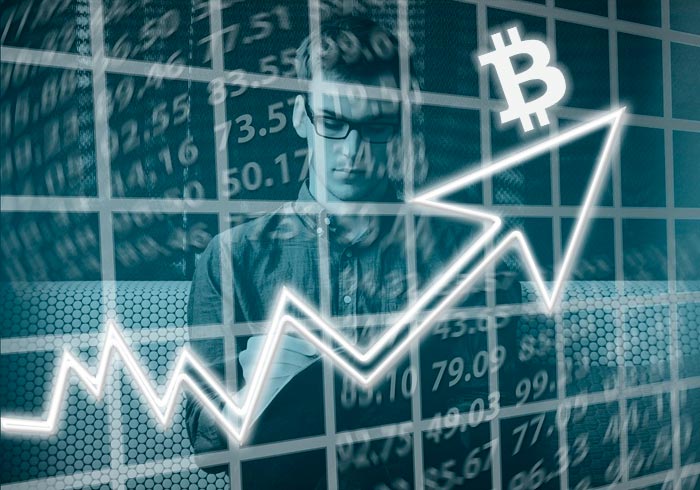 The Bitcoin price is flirting with the $9,000 mark after surging more than 10% on Sunday evening to reach 2019 highs of $8,845 according to data provided by Coinmarketcap. Over the past few days, the price has been ranging in the high $7,000s forming an ascending triangle on the daily charts that has been broken with the recent rally. Bitcoin gained $600 in an hour ricing from $8,011 and making a stopover at $8,615. The price then went rose at a more relaxed gradient to close the day above $8,800

As expected, the altcoin market took a cue from the flagship cryptocurrency with all coins in the top 20 seeing gains in the range between 5 and 15% with Bitcoin SV posting the greatest gains of 18% in the last 24 hours. The price of Bitcoin has since tapered off after reaching its intraday high and the asset s now trading at $8,724.

The Bitcoin market cap also saw a nice uptick reaching a high of $156.8 billion. The BTC market is currently $154.6 after the price of Bitcoin receded a few percentage points. Bitcoin still commands a respectable 57.3% of the overall market cap which currently sits at $269.5 billion after gaining about 8% on Sunday evening. Bitcoin recently took a nosedive back to the $6k territory on the Luxemburg-based Bitstamp exchange leading to some investors being liquidated on the popular margin trading platform BitMEX.

Ethereum, the leading altcoin has also seen impressive price gains over the past 12 hours following the Bitcoin price rally. Ethereum’s price rose by 8.5% from $250 to an intraday high of $271. Its market cap has similarly risen to $28.5 billion to command about 10.5% of the overall market capitalization. Its price is currently $268.

Bitcoin S, currently ranked at #12 on the CoinMarketCap list is perhaps the biggest gainer over the last 12 hours seeing its price rise by a whopping 25% in about an hour. Rising from $90 before the rally to an intraday high of $113 before receding to its current rate of $107.

The market sentiment has recently turned bullish following several attempts by Bitcoin to break its previous yearly highs and doing so successfully. The cryptocurrency has consistently posted higher lows which is a bullish signal for technical analysts. Alex Krüger, a global markets analyst recently tweeted BTC resistance and support levels according to his analysis. According to him, once the BTC price breaks the $8,400-8,500 resistance, the next resistance level is the psychological $10,000. His tweet read:

0
The Bitcoin price is steady, firm under the expectation of bulls. After stellar performances in the last few weeks, the coin has the attention...
Read more
Bitcoin News